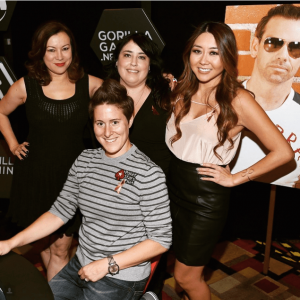 Last week we previewed the Second Annual Chad Brown Memorial Tournament and, this week, after the dust had settled and the echo of riffling chips had faded, it was that event’s host, Maria Ho, who stood victorious.

The charity event, which was held in memory of Brown and as a way to raise money for the T.J. Martell Foundation, attracted 150 players, including the likes of online phenom Chris Moorman, Vanessa Selbst and Liv Boeree.

However, when the curtain went down on the $240 tournament, it was Ho left with the biggest smile.

According to those inside Planet Hollywood, Las Vegas, a slew of poker pros and celebrities anted-up at least once, and many exercised their right to rebuy a stack of chips for $100.

Ho herself was among those players needed to replenish their stacks; in fact, before she finally picked up enough momentum to take down the title, Ho had rejoined the action six times.

This willingness to gamble and concentration of pros meant the final table was stacked with talent. In fact, joining Ho for the final showdown was a string of recognizable faces, including the aforementioned Selbst, John Duthie, Tony Hachem and Leo Margets.

However, as the field thinned and bets flew in from all angles, it was Ho and Kevin O’Donnell who found themselves heads-up for the trophy.

Having enjoyed a rush of good fortune earlier in the tournament, Ho entered the finale with the momentum and quickly pressed home her advantage.

Within a few hands the American pro managed to claim the remainder of O’Donnell’s chips and take home the top prize of $2,766 in cash and a $10,000 seat into the WSOP Main Event.

However, after the celebrations were over, Ho took to Twitter to explain that she’d given all of her cash winnings to the T.J. Martell Foundation.

Overall, the charity tournament was a huge success and the mood was decidedly more upbeat than last year’s inaugural event (which took place not long after Brown’s death).

Moreover, thanks to various donations and rebuys, the event as a whole managed to raise $80,000 for research into leukemia, cancer and AIDS.

“We are thrilled about the association with the Chad Brown Memorial Poker Tournament and Planet Hollywood. The monies raised will support cutting-edge sarcoma research in the United States,” said Laura Heatherly, CEO of the T.J. Martell Foundation.