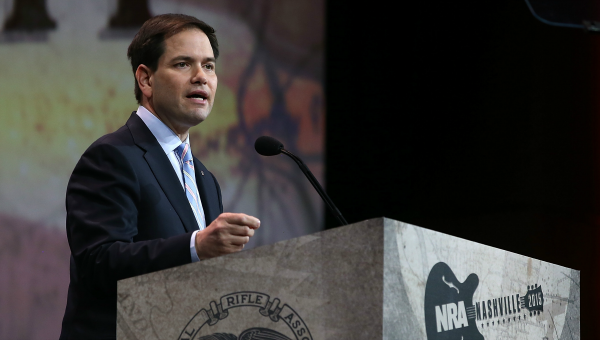 Marco Rubio has given American poker players some hope by hinting at a carve-out for online poker in his RAWA legislation. (Image: AFP )

GOP contender Senator Marco Rubio (R-Florida) has hinted in an interview that poker could be given a carve-out in his co-sponsored bill on online gambling.

The Florida senator is co-sponsoring a federal bill on online gaming from South Carolina senator Lindsey Graham. While up till now the pair have spoken out against all online gambling, a glimmer of light was given to US poker players in his latest exchange.

“On the issue of Internet poker, the only difference between the poker games and the others is that it involves an element of skill associated with and compared with just a slot machine online. So that’s the one area that distinguishes it a little bit.”

While Rubio, who is currently pursuing the Republican presidential candidacy nomination, provided some hope for American online Hold’em players, don’t get your bankroll too play-ready just yet.

State lotteries across the country, which bring in billions of dollars, would also need an exemption from the proposed Restoration of America’s Wire Act (RAWA) bill. Many lottery operators are anxious to offer online table games as part of any future legislation, and will be looking for their own carve-outs in that arena in future RAWA attempts.

Also expressing caution about a potential carve-out was Las Vegas Sands’ Andy Abboud, who said there was “no carve-out” from the bill’s sponsors.

“There may be some various opinions from the co-sponsors,” he added, “but there really isn’t any push for it.” Abboud, of course, stands behind boss Sheldon Adelson’s extreme lack of enthusiasm for any US online gambling, by way of the Coalition to Stop Internet Gambling initiative that Adelson has poured millions into. The LVS honcho also backs RAWA, along with six GOPers, including Rubio.

The bill proposes a return to a pre-Black Friday scenario when all online gambling on a federal level was outlawed under the 1961 Wire Act. Only a change in stance by the Department of Justice (DOJ) in 2011 made it possible for individual states to self-regulate. Currently, just Nevada, Delaware, and New Jersey have passed legislation allowing legalized online gaming in their states.

Legalized States Ready For a Fight

Jason Chaffetz (R-Utah) meanwhile, one of RAWA’s original sponsors, spoke this week about his concerns regarding exemptions for fantasy sports and horse racing.

“There are a lot of outstanding questions, and there are many of us who are concerned it [daily fantasy sports] is truly gambling. So we will see how that plays out,” he said. “Certainly Nevada is the leader in understanding gaming. So it should cause a lot of people concern if Nevada finds that it is truly gaming.”

Nevada banned DFS as a game of luck this month, forbidding unlicensed operators from offering the game within the Silver State.

DraftKings, previously a major World Series of Poker sponsor, is now not only persona non grata for the event, but even asked to have all of its logos removed from the WSOP November Nine set, presumably to stay in the good graces of gaming commissions everywhere as the sport comes under its own regulatory scrutiny nationwide.

Even if the youthful Rubio (he is 44) can force an exemption for online poker, any federal bans will be vehemently opposed by Nevada, New Jersey, and Delaware. The states have gone through too much pain and money to allow a such a cutoff to impact their industries. The fight against a ban on legalized Internet gambling continues.