The Maloof brothers, Joe and Gavin, are so putting their money where their mouth is on the August 26 fight between Floyd Mayweather and Conor McGregor. 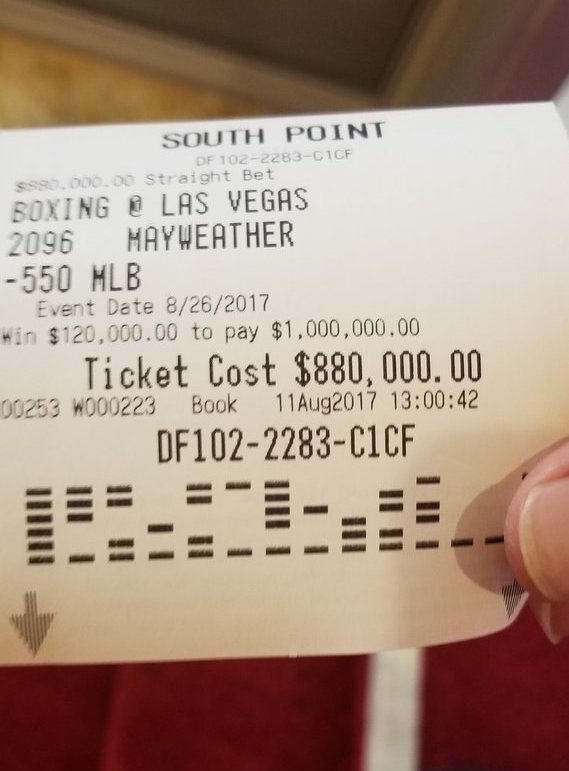 The former owners of the Sacramento Kings are so confident the former will crush the latter, they put in a bet of $880,000 at South Point casino in Las Vegas.

The ticket was the biggest known wager on either fighter thus far. The brothers bet on Mayweather to win the fight at -550 odds with the potential to profit $160,000.

If the Maloof’s win the bet, they will donate all the profits to charity. Gavin told the Las Vegas Review-Journal he lives “down the street” from Mayweather and said he’s “known him for years.” Beyond personally knowing the fighter he bet on to win, he explained his reasoning.

“Conor McGregor’s great and all the respect in the world to Dana White and the UFC. But it’s very difficult to transplant an MMA fighter to boxing,” Gavin Maloof said.

Too Much for McGregor to Handle?

McGregor, 29, is much younger than Mayweather, 40. Gavin Maloof acknowledged that could give him an advantage. But the MMA fighter doesn’t have any professional experience in the boxing ring.

The former co-owner of the Palm’s Casino Resort in Las Vegas doesn’t believe McGregor will be able to land many solid punches on Mayweather, a boxing champion looking to finish out his career undefeated at 50-0.

The Maloof’s haven’t announced the charities that would benefit from a Mayweather victory. They told the Review-Journal they will wait until after the fight to make an announcement.

Bettors Starting to Give ‘Money’ Love

South Point sports book director Chris Andrews told the newspaper he was “happy to take the bet” due to so much money already having been wagered on McGregor.

Since the fight was announced in June, an overwhelming majority of the money has been put on McGregor to win. That isn’t necessarily an indication the general public believes the UFC champion will actually win. It has more to do with the lopsided odds.

When the fight was announced, Mayweather opened at -800 and McGregor +500. With so little value betting on the undefeated boxing champion, the bettors saw more value in wagering on his UFC opponent.

Now that the line has dropped, -500 on Mayweather on August 14 on Bovada online sports book, the big “Money” bets are starting to come in, including the $880,000 wagered by the Maloof’s.

The fight, scheduled for August 26 at the new T-Mobile Arena on the Las Vegas Strip, is one of the most anticipated boxing matches in history. But many boxing experts predict it will be a dud.

Mayweather has dominated the sport of boxing for the past two decades. He’s one of the most athletic boxers ever, and makes it nearly impossible for any opponent to land a haymaker. McGregor, albeit a skilled mixed martial artist, hasn’t fought an entire professional fight standing up. Many see that as a disadvantage, including the Maloof’s.

This bet will work.

No sir would I put that on blast. Think about this for a minute…. If Mayweather wanted a huge payday he can take every bit of money he has and get one of his entourage to place multiple huge bets. It would be the biggest payday ever since Connor is going to be a ginormous underdog in this fight. The only question that remains is how is how much does a 50-0 record really mean to Mayweather? I’m going to laugh my ass off if this fight gets thrown.