So much to cover, so little space and time. The WSOP Main Event begins at 11 am PT on Saturday, but we’ll also be keeping an eye on a couple other tournaments that could impact the Player of the Year race. Daniel Negreanu and Chris Ferguson, both within striking distance, need some Saturday rungood to shake things up. And we haven’t even mentioned the ladies event that just got underway, or the two Friday bracelet winners. Busy, busy, busy. 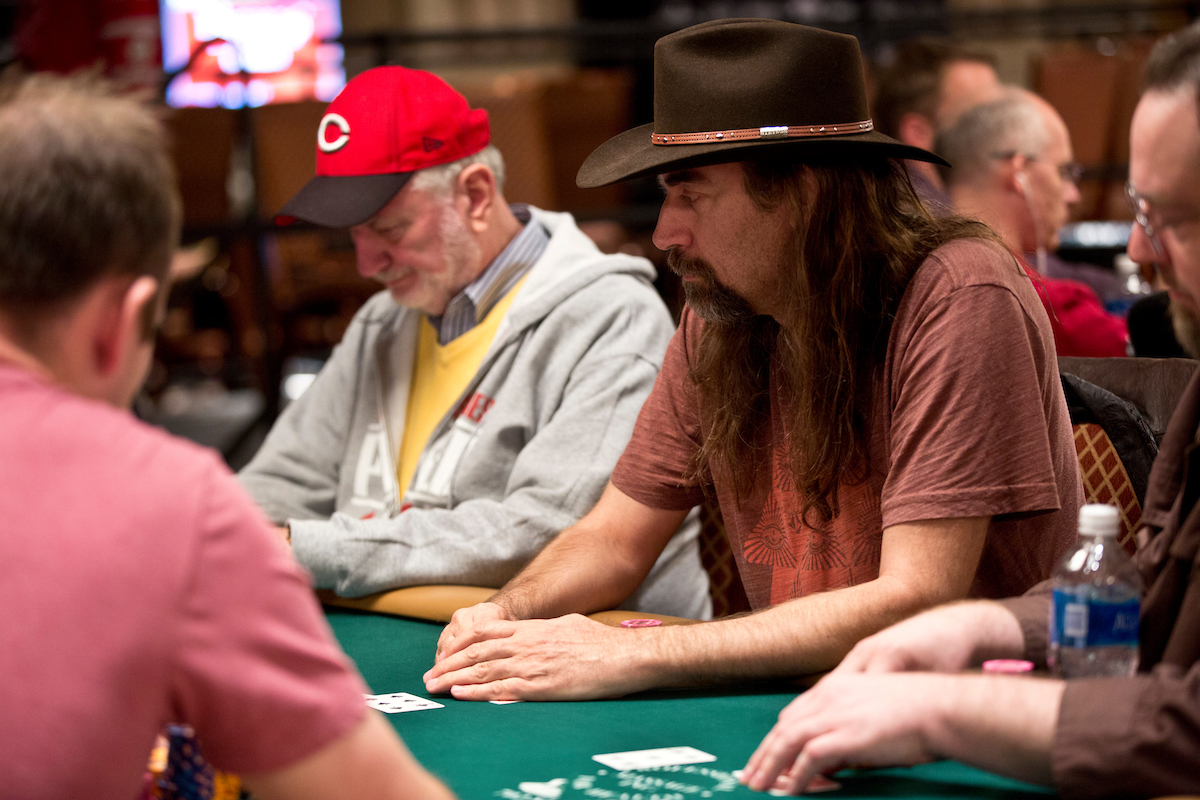 A more casual Chris Ferguson finds himself in a great position to contend for WSOP Player of the Year, but he’ll still need some rungood on Saturday before he can relax. (Image: Jamie Thomson / PokerPhotoArchive.com)

Let’s Get It On

We’ll start today’s recap with the Main Event because it is the tournament poker fans all over the world mark on their calendar. Some 6,500-plus bracelet hopefuls will sign-up for this $10,000 buy-in event.

At this time last year, defending champion Qui Nguyen was a low-stakes grinder in Las Vegas. Thanks to a sick heater, he’s now $8 million richer.

Some of the greatest poker players ever have won this event that crowns a world champion. Pros such as Doyle Brunson, Phil Hellmuth, Scotty Nguyen, and Johnny Chan all have banners hanging from the rafters inside the Rio commemorating their victories. For legends who have passed, like Johnny Moss or Stu Ungar, we might hardly know them if it weren’t for what they accomplished in this annual tournament.

The 2017 Main Event will have three Day One starting flights, with the first on Saturday. For survivors, Day Two starts on Tuesday. As former boxing referee Mills Lane would say, let’s get it on.

POY Still Up for Grabs

Saturday is an important day in the Player of the Year race. In Event #68, $3,000 No-Limit Hold’em, Daniel Negreanu is one of 37 players to advance to Day Three. They’re well into the money in this event, so POY points are still in play.

Negreanu has 262,000 chips after dumping nearly half his stack late in the day Friday. Chance Kornuth bagged the most chips (1,467,000) in that event.

That would propel him to the top spot heading into the Main Event, ahead of current leader Ryan Hughes (820.71) and 2nd place John Racener (814.42). Negreanu is guaranteed at least 62.1 points, but that won’t be enough to win POY unless he runs well in the Main Event or in WSOP Europe events later this year.

Chris Ferguson also within striking distance for POY. The definitive “bad guy” in this race, he was first to break the single-year cash record (13), and is now at 15 cashes. (Hughes is also at 15, and Racener currently holds the new record at 16.)

How important is the Main Event in determining Player of the Year? No POY winner has cashed in the Main Event since Greg Merson in 2012. Merson did more than just cash. He won the event.

This year, given how close so many players are in the standings, the Main Event is likely to have a significant impact on POY.

One of his opponents also is still in this race. “Angry” John Monnette finished Day One with the chip lead (371,000), and he begins play on Saturday one spot ahead of Ferguson for POY with 784 points.

James Calderaro might not have the name recognition of, say, Daniel Negreanu. But the man has an impressive resume that has gone under the radar.

The Floridian is also a World Poker Tour champion, having won the WPT Lucky Hearts Poker Open in 2014. He’s made three final tables on that tour.

For Smith, it was another close call. The poker-playing philanthropist has done just about everything in the poker world but win a WSOP bracelet. He has more than $5 million in cashes lifetime at the Series, but just can’t quite get over the hump.

It’s been a rather disappointing summer for Phil Hellmuth. The 14-time bracelet winner can’t seem to run it up lately, but he’ll have another opportunity to do so on Saturday in Event #69, $1,500 Razz.

Vanessa Selbst, arguably the best female player in the world, spent much of the day with the chip lead in Event #70, $10,000 Ladies No-Limit Hold’em Championship, which women get to enter for the discounted price of $1,000.

Selbst didn’t finish the day at the top of the leaderboard, but her 94,800 stack puts her at 6th out of 85 remaining players.

The lawyer turned poker pro is shooting for her fourth career bracelet. She would be the first woman to accomplish this milestone. Selbst has $2.2 million in lifetime WSOP earnings and would love to add the $135,098 the winner is going to receive in this event to her resume.

Main Event in Your Pocket

Don’t forget, for the first time ever, you can watch the Main Event live (30-minute delay) starting on Day One (Saturday).

PokerGO, a new subscription-based app from PokerCentral, will begin coverage at 11 am PT on Saturday until ESPN2 picks it up at 2 pm. The tournament then switches back to PokerGO at 5 pm.