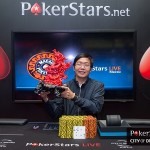 The most recent Macau Poker Cup series was another successful one, held again at the PokerStars LIVE Macau poker room.

Records were set, champions were crowned, and millions of Hong Kong dollars were distributed to the best of the players.

Mikal Blomlie was the overall chip leader from those initial flights with 169,500 chips.

Day 2 started with 221 survivors but reduced the field into the money and down to just 46 players. Names like Blomlie and Andrew Scott exited with cash, as Wai Leong Chan soared to the lead with 766K chips.

Players like Kenny Leong and Winfred Yu busted on Day 3, and Kanaal Chandra bubbled the final table. Hu Liu had the final table chip lead with 3,155,000 chips, with Mathew Ryan in a distant second with 1,765,000 chips and Zhenru Xie in third with 1,275,000 chips.

Xie went into heads-up with the lead over Ryan, and despite an initial few hands going to Ryan, Xie took a massive pot that left his opponent with just 900K chips. Ryan then risked his last stack with J-4 against the 7-2 of Xie, but a seven on the flop eliminated Ryan in second and gave Xie the win.

The final results were:

The final 31 players in the tournament cashed, a list that included names like Celina Lin and Hao Chen. The final table played out on the second day, and a three-way deal saw Mahipalsinh Vala take home more money for second place than winner Yuhito Hayashi did for his first-place victory. Those top payouts were:

The top seven players cashed from the final table, and the final results were as follows: