Lynn Gilmartin’s efforts to rally the poker community have resulted in a AU$100,000/US$66,990 donation to Australia Zoo. 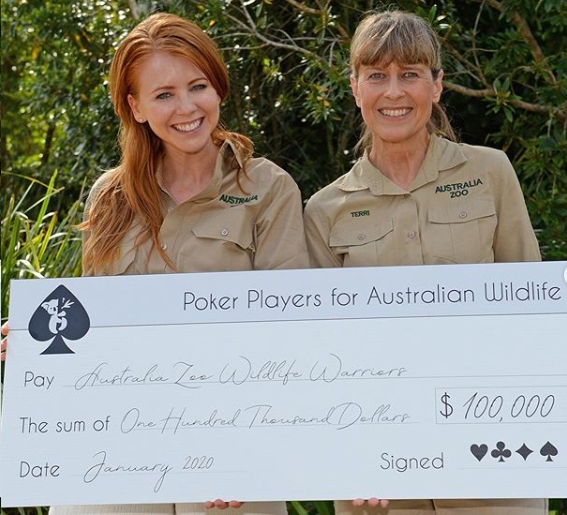 The World Poker Tour (WPT) host put out a call to action in January. Aiming to raise money for animals affected by Australia’s wildfires, Gilmartin set up a Facebook page.

Calling it Poker Players for Australian Wildlife, she asked members of the community to help in any way they could.

We spoke to Gilmartin soon after the fundraiser went live. She explained that level of devastation was almost beyond comprehension.

“We need your help. Our precious koalas are already an at-risk species, and now they are believed to have had ⅓ of their population wiped out by these fires. My heart aches,” Gilmartin told us on Jan. 8.

Moved by the news, the poker community sprung into action. As well as direct pledges, a number of pros found ways to up the ante. Leading by example was recent Super High Roller Bowl Australia finalist Kahle Burns.

Thanks @LynnGilmartin! You’ve brought together so many Wildlife Warriors to help wildlife affected by the bushfires in Australia. All this kindness makes my heart happy, & makes me believe we can help make the future brighter. It was wonderful to have you visit us @AustraliaZoo! https://t.co/RQTdwDvMoW

Like Gilmartin, Burns is Australian. This personal link to the devastation prompted him to offer free group coaching for donations of $500+.

When the money from all sources was added together, the poker community has raised AU$100,000/US$66,990. After receiving the check from Gilmartin, Terri Irwin, wife of the late Steve Irwin aka the Crocodile Hunter, thanked her for the contribution.

In turn, the Australian Poker Hall of Fame member thanked everyone that donated. She also found time to upload pictures and videos from her visit to Australia Zoo.

I went in for the pash ? but he wasn’t having it.

Although there has been some light relief over the last two weeks, Australia’s wildfires continue to burn. On Jan. 31, officials in the Australian capital Canberra declared a state of emergency.

Embers blown by the wind have sparked a fire that now covers 88,500 acres/35,800 hectares outside of the capital. Residents have been told to evacuate but there are fears it may be too late for some.

The money raised by poker players will help Australian Zoo save animals from extinction. So far, more than one billion have been displaced by the wildfires.

Staff at the zoo have been trying to save as many animals as possible and are now working to nurse those sick or injured back to health.

Although staff at Australia Zoo have a mammoth task ahead of them, donations from various sources are helping. As well as the money raised by poker players, YouTubers such as Ben Phillips and schools around the world have raised five-figure sums.

This money will now be used save Australia’s wildlife from some of the worst fires in living memory.

The best way to save the wild life is to remain wild life. They must make efforts to restore the natural enviroment and to reforest the burnt forests. Will this happen or we will see buildings and factories and hotels instead of forests and natural enviroment?