The poker community is showing its benevolent side once again, this time as wildfires in Australia devastate New South Wales and beyond. 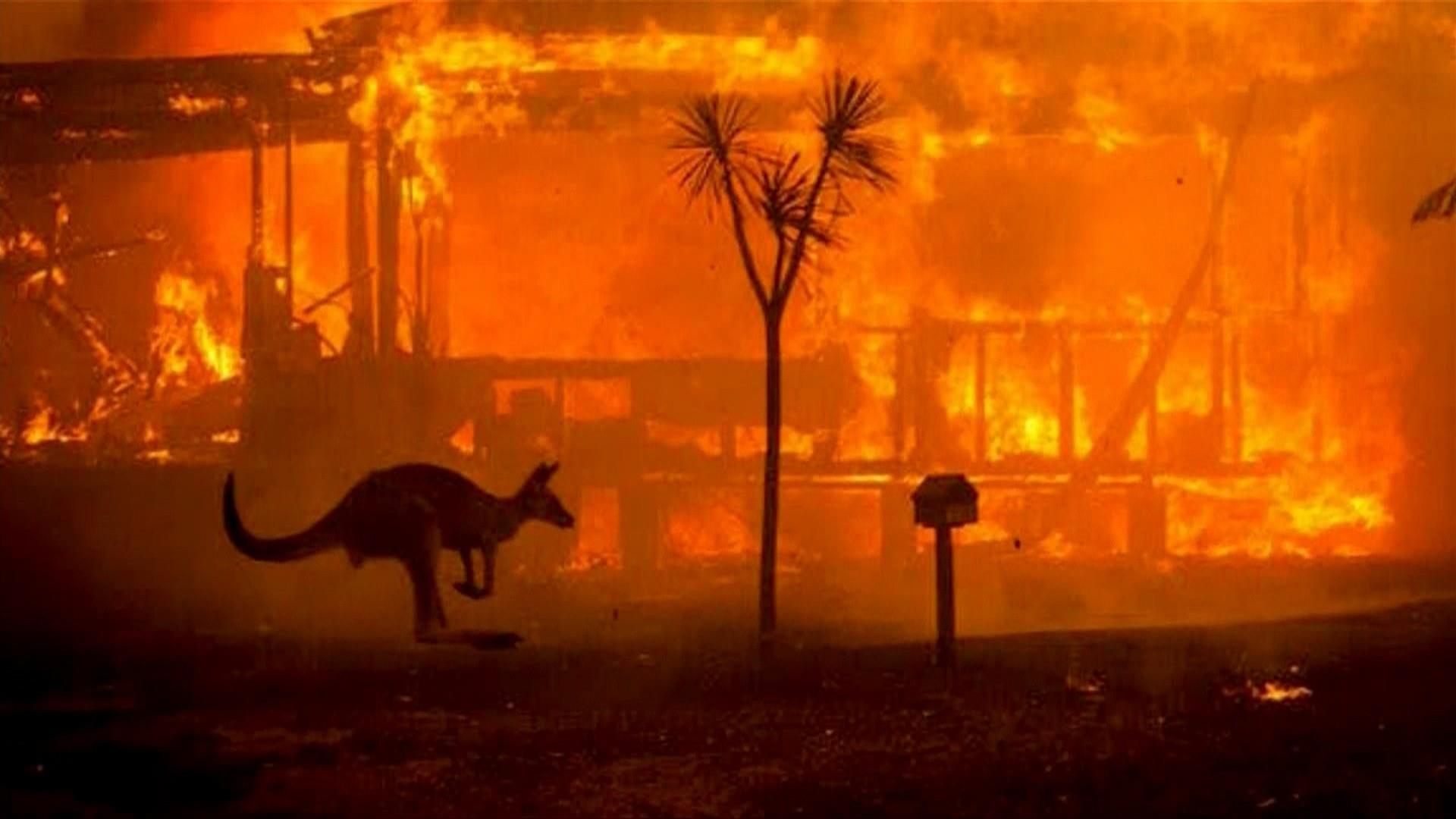 Millions of animals in Australia are running for their lives as deadly bushfires destroy their homes. (Image: NBC Today)

World Poker Tour hostess Lynn Gilmartin on Monday launched Poker Players for Australian Wildlife, a Facebook fundraiser to help wild animals whose habitats are being devastated by blazes that have been raging across the nation for months.

Since September 2019, more than 15 million acres of Australia have gone up in flames. The fires have destroyed some 1,400 houses and displaced tens of thousands who have been forced to evacuate. At least 25 people have died.

“The fires continue to worsen,” Gilmartin told CardsChat via email. “The headlines have been mortifying.”

For Australia’s animal population, the numbers are even more apocalyptic, with an estimated 480 million creatures killed, their scorched remains littering the countryside. University of Sydney ecologist Chris Dickman now says the number of Australian animals to have perished could be closer to one billion.

“Half a billion animals,” Gilmartin said. “I just cannot comprehend that figure.”

With harrowing images of dead kangaroos and screaming koalas spreading on TV and online, Gilmartin took to her own social media feeds to help make this Australian national disaster matter to people everywhere.

Speaking from her home in Melbourne, she shared her plea on Instagram for help. Doing what they do best in times of crisis, poker players have responded with a willingness to share a piece of their bankroll for a good cause.

Thank you so much to our generous poker community!!! We have already raised $24,000 for @wildlifewarriorsworldwide who are treating victims of the #AustralianBushfires ? Please see the link in my bio for more info and let’s keep growing that number!! ?

Gilmartin’s endeavor started with modest aspirations, hoping to raise AU$5,000. She met that goal in a matter of hours, and barely two days later, her campaign had generated more than AU$28,700 in donations from 240 donors, most of whom come from the poker community. 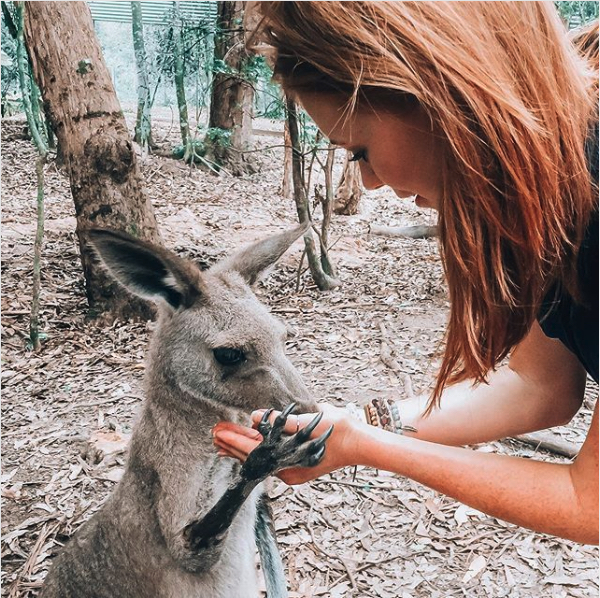 Lynn Gilmartin, seen here at the Australia Zoo animal hospital a few years ago, is getting poker players to put their charitable dollars in good hands. (Image: Instagram)

Gilmartin says she has supported the group for years, and has visited the hospital, which has treated more than 90,000 animals since it first opened in 2002. In addition to its regular work of helping wild animals suffering from sickness, injury, or that are otherwise threatened, the hospital is now also taking in victims of the Australian fires.

“We need your help. Our precious koalas are already an at-risk species, and now they are believed to have had ⅓ of their population wiped out by these fires,” Gilmartin said. “My heart aches.”

Not surprisingly, fire threats rise in the summer, which Down Under runs from December through February. This also happens to coincide with a stretch of the biggest annual poker events in the Southern Hemisphere.

Though poker casinos in Melbourne are some 200 miles away from the flames, no one in Australia is unaware of what’s going on just over the horizon.

The Aussie Millions got underway on Saturday, at the Crown Casino in Melbourne, and runs through most of Jan. 24. The host venue Crown claims to have donated 200 rooms and given $5 million to different fire relief efforts.

Then on Jan. 25, for the next week, is the WPT-affiliated Australia Poker Open, at the Star Casino Gold Coast in Queensland. This will be followed by a new Super High Roller Bowl Australia. 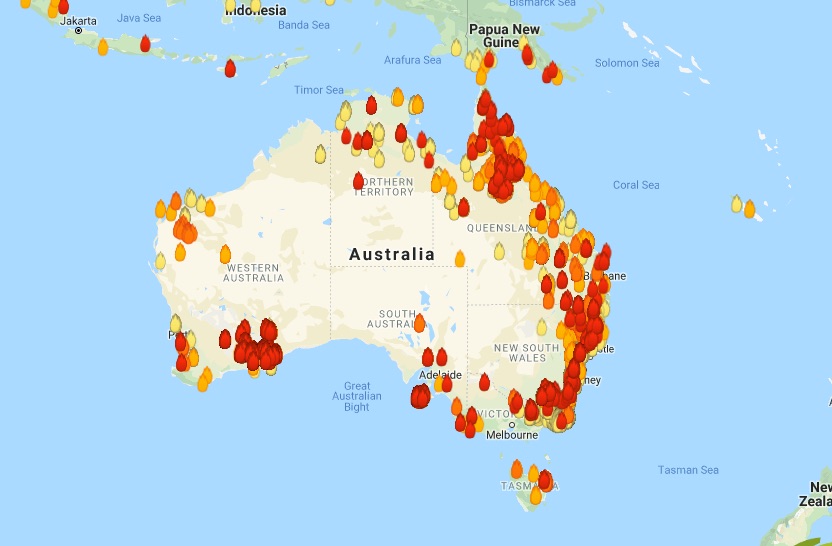 Hot Spots: Melbourne (lower right) has avoided the worst of fires raging across Australia, but it’s impossible for players at the Aussie Millions there to not be aware of what’s going on so close, all around them. (Image: TheSun.co.uk)

Bushfires are common in Australia, but the recent infernos are rather unprecedented. Unusually high temperatures, drought, and strong winds have become a deadly recipe.

“It’s going to take months to get these fires under control,” Gilmartin said, “and years to recover.”

As the flames encroach on a city’s suburbs, smoke has become an issue.

In recent days, Australian Open organizers have said the air quality could pose a problem for the grand slam tennis tournament, which also gets underway in Melbourne in January.

Although the tennis major is expected to go ahead without interruption, start times may change due to the blanket of smoke hanging over Melbourne. On Tuesday, organizers said they have contingency plans to play indoors if the air quality worsens.

I made a donation and shared it on Facebook!

IMHO as an Aussie there are much better ways to donate to help the Australian wildlife, If I read this right, a private zoo is going to be the beneficiary to build a new ward for their animal hospital.

WIRES (Wildlife Information, Rescue and Education Service) has been rescuing and caring for wildlife for over 30 years and is the largest wildlife rescue organisation in Australia.