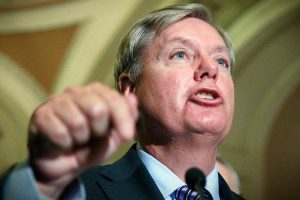 A stark opponent to online gambling and RAWA supporter, US Senator Lindsey Graham has announced he is considering a run at the 2016 presidency. (Image: downtrend.com)

Senator Lindsey Graham (R-SC) announced on Thursday that he has formed an exploratory committee to examine his chances at securing the Republican nomination for the 2016 presidential election.

Graham’s organization, officially known as “Security Through Strength,” will test the waters to see whether the 59-year-old senator has the popularity and fundraising ability to challenge the other 15 or so GOP candidates. That long list includes several Republican strongholds, including former governors Jeb Bush (Florida), Mike Huckabee (Arkansas), and current New Jersey Governor Chris Christie.

“What I’m looking at is, is there a pathway forward on the ground in Iowa and New Hampshire for a guy like me? I don’t know until I look,” Graham told reporters at the Capitol yesterday.

His statement refers to the importance of the early nominating states that often heavily influence the primary outcome. The good news is that his home state is traditionally third in line.

Last November, Graham won a third Senate term, 20 years after he first became a member of Congress. His tenure serving South Carolina has been long and successful according to the voting majority of his constituents. He’s been elected into office seven times, but mulling a run for the White House in today’s political climate often boils down to fundraising.

Like many Republicans, Graham is tough on defense and anti-terrorism measures. He’s also tough on, or more appropriately, against, online poker.

The Senator believes online gambling as a whole is a bad thing for Americans, and even links it back to terror. Graham sponsored the Restoration of America’s Wire Act (RAWA) in March of 2014, a bill aiming to ban most forms of online gambling.

The legislation is thought to be highly driven by casino mogul and billionaire Sheldon Adelson, perhaps Internet gambling’s biggest and most financially equipped opponent.

RAWA ultimately fell short in December as lawmakers passed on the bill, but Adelson’s presence is still fully known. An adamant supporter of the GOP and worth over $30 billion, Republican contenders will cater to Adelson to receive his financial backing.

At this week’s Senate hearing regarding Loretta Lynch’s nomination for US Attorney General, Graham probed to get her insights on Internet wagering.

“Would you agree one of the best ways for a terrorist organization or a criminal enterprise to be able to enrich themselves is to have online gaming that would be very hard to regulate?” Graham inquired.

Lynch responded by saying those who support terrorists use any means to finance extremist organizations. Although Lynch didn’t necessarily agree or disagree with Graham’s statement, she received his backing later in the day, telling reporters he was “inclined” to support her.

Graham’s endorsing of Lynch, a nominee picked by President Obama and exiting Attorney General Eric Holder, might have been a calculated display of bipartisanship.

“My party is center right. Barack Obama ran as a centrist, he’s been in the left ditch. To get America out of the left ditch, you don’t want to put the car in the right ditch,” Graham explained.

Graham in the White House: Bad for Online Poker?

From “Fast & Furious” to Benghazi, Eric Holder has been focused on many pressing issues and controversies over the past few years. However, online gambling hasn’t garnered much attention from the attorney general, president, or even Congress.

Graham’s questioning of Lynch during his allotted time regarding her views on Internet wagering could signal that Adelson hasn’t given up his fight. In fact, Adelson recently met privately with Republican Senate Judiciary members to reportedly discuss the matter.

Right now, Congress doesn’t seem poised to tackle online gambling one way or the other.

However, should Graham secure the presidency, the issue will likely be brought front and center to satisfy Adelson’s campaign contributions. That’s not necessarily a bad thing for online poker players, as a more publicized debate could lead to additional legalization.