If the Poker Hall of Fame (HOF) was invented for one person, then surely it’s Mike Sexton. 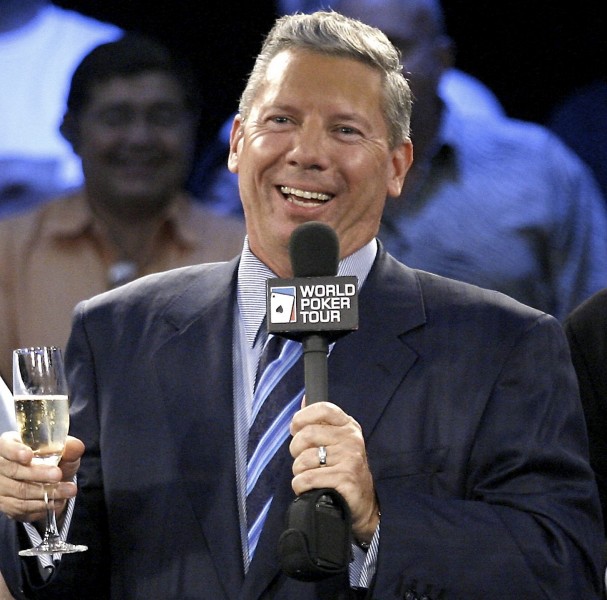 More than 15 years of World Poker Tour hosting, and still no appetite to stop: Mike Sexton and the WPT continue to travel the globe. (Image: pokerplayersbase.com)

A high-stakes gambler and poker player who has played at the biggest levels on the grandest stages, won gold bracelets, made crazy prop bets, pioneered online poker sites, appeared in front of the camera as well as behind it, Sexton continues to support the game at all levels.

No wonder he was the sole inductee into the 2009 HOF: to be honest, who else was there?

Mike is poker’s answer to (in the nicest possible way) Forrest Gump: one of the game’s “everymen” who always seems to be there at the right time, and in the right place.

In 2001, as described in Anthony Holden’s impressive account of the development of poker, Bigger Deal, Sexton was responsible for heading up a team of web developers in India. The result of those long flights to the sub-continent was an affinity for partypoker, the online site which still enjoys the American pro’s patronage.

The recent author of a new book, Life’s a Gamble, Sexton spoke with us about poker, his television career, the challenges of marriage, and exactly what’s so delicious about a really good prop bet.

Mike is still an ambassador for the site that joined the US market, rather hurriedly left it following the DOJ 2011 crackdown, and then came back on board when New Jersey and Nevada went legal a few years ago. He continues to be a co-host on the World Poker Tour, a role he’s held alongside Vince Van Patten for 14 years now, and he plays a little poker himself, to boot. 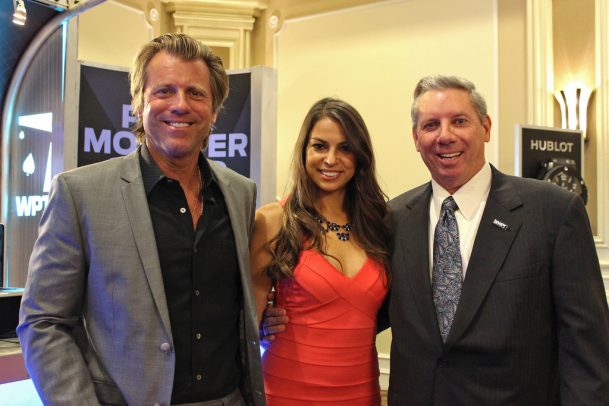 Nice work if you can get it: along with Vince Van Patten, left, and the bodacious Royal Flush girls, Sexton’s name is indelibly intertwined with the World Poker Tour (WPT). Image: flickr.com)

So why has it taken so long for a book about his exploits? Mike tells us that Life’s A Gamble, which will be available on Amazon as of July 7 and can now be pre-ordered, isn’t really all about him.

“I was conscious about writing Life’s A Gamble in my own words,” he says.

“I didn’t have a co-author or ghost writer and all the stories in the book I witnessed or participated in.  I’m flattered that noted authors Des Wilson and Anthony Holden would use me and/or my stories in their books, but my book goes into more detail, even regarding similar stories.”

One of those “similar stories” involves a legendary golf prop bet between Sexton, Huck Seed, and Doyle Brunson. (Spoiler Alert: It didn’t end well for Dolly.)

It’s not just on the golf course that Sexton has made and lost millions. He was a regular at the infamous Bobby’s Room: the Bellagio high-rollers’ cardroom where millionaire gamblers and serious pros congregate to battle it out for nosebleed stakes.

As he recounts in Des Wilson’s Ghosts At The Table, Sexton would sit down with a fortune in Bobby’s Room ($100,000 on his first visit) and quickly lose it. Phil Ivey, so the story goes, was sitting in the same game and simply spotted Mike another $200k. And that, too, was soon in the stack of one of his opponents.

“I was staked in some big games and golf matches years prior to that [Bobby’s Room visit],” Sexton says.

“All my bankroll swings came because of betting on sports. I’m not proud of it, but I stayed broke for over 25 years because of my one and only leak: my bad sports betting habit.

“But even when I was broke, because of my connections with Danny [Robison], Chip [Reese], Puggy Pearson, and Stu Ungar (the guys who staked me or loaned me money the most), I could always get back in the action.”

Mike was always “in the right place at the right time.” He had the “good fortune”, he says, of hanging around the “legends of poker in Vegas during the 1970s and ’80s.

“I witnessed some of the biggest action ever, on the poker table, the golf course, and in the sports betting world. The old-school high stakes poker players bet high and gambled on everything.”

Gamblers Danny Robison and the late Chip Reese (who would himself be inducted in the Hall of Fame and later have a WSOP event named in his honor) were close friends of Mike, coming from the same hometown of Dayton, Ohio.

After making it big in Vegas, Sexton would stay at his pals’ house, joining them on the golf course and seeing how the high rollers lived.

Marriage as a Bad Bet

But it was sportsbetting that would be Sexton’s undoing, and would be much of the cause of the demise of several of his three marriages, by his own summation. Of course, poker alone has been known to be a tough mistress for many a wife to handle.

For Sexton, divorce is the “reality” that has played a part in most poker players’ lives.

“I can assure you that it’s not easy being married to a gambler,” he says.”The swings of being in and out of money are just too much for many wives to deal with. And as a poker player, if you’re in a really good poker game with a ‘live one’, for example, or you’re stuck, it’s tough to leave the game to meet the wife for dinner.” 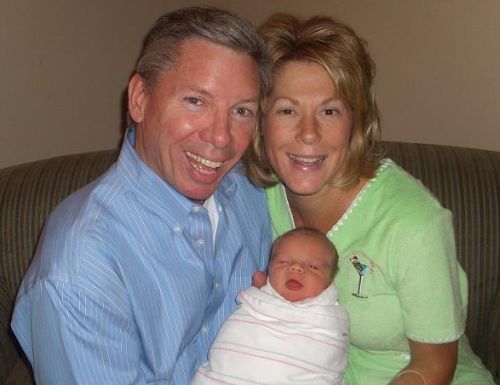 Daddy at last: Along with wife #3 Karen, Sexton waited till he was 60 to create his first child, Ty, born to the couple in 2008. (Image: pokernews.com)

With his third wife Karen, Sexton produced his first child, a boy who they named Ty, at 60 years old in 2008.

Despite the swings and the marital rollercoaster, one can’t argue with the place Mike Sexton has had in the development of poker itself.

Pioneer On Screen And Off

Sexton helped bring poker to television, devising the Tournament of Champions in the 1990s, and helping make the World Poker Tour (WPT) a reality. And to this day, he remains indelibly intertwined with the show as its iconic host, along with Van Patten. His path from gambler to pioneer is also well-documented in the new book, as are the many issues players had with the WPT when it first launched.

Famously, players like Howard Lederer and Chris Ferguson felt uncomfortable with the World Poker Tour “piggybacking” off the players’ images. Essentially, these pros were upset that their major sponsor, Full Tilt, was shut out of casinos that could only host WPT-televised events.

An anti-trust case was launched by five players, and eventually settled with the WPT in 2008. The players in question were all household Full Tilt names, but Lederer and Ferguson would fall spectacularly just five years after the lawsuit was initially filed, when Black Friday hit in 2011.

“I was angry with those who launched their anti-trust case against the WPT, primarily because they became stars and celebrities in the poker world because of the WPT,” Sexton noted.

“I believe they were able to start Full Tilt and become successful with it because the WPT promoted them and made them stars.

“I sympathized not with Lederer or Ferguson (because they had gotten rich), but with the poker world (and those who didn’t get their money back) when they fell because it was a huge black eye for poker, especially online poker,” Sexton said.

The Joy Of Sexton

While Lederer and Ferguson are just starting to resurface, Mike Sexton soldiers on. He is still involved heavily with the company where he helped launch the “PartyPoker Million” some 15 years ago, and even found time to play in Scotland as part of partypoker’s Grand Prix Poker Tour. But will he still be traveling the circuit in 10 years’ time?

“‘If you didn’t know how old you are, how old would you be?’ the saying goes.

“The answer is: ‘You’re as old as you feel.’ I still feel pretty young so as long as I’m doing what I love to do, why would, or should, I stop?

“My answer to that would be: As long as I’m healthy, I’m hoping and planning on being around poker for a number of more years.”

It would be a canny gambler to bet against another Mike Sexton bracelet or major cash in the near future. For now, we can enjoy his tales of the old school, innovations and scandals when Life’s A Gamble is released this summer.

Mike Sexton was a NATURAL for world poker tour, and a soooooooooooooooooo cool,dazzling, and gifted announcer. I will be playing in some of the tournaments at the casinos soon again, and so glad to see that Sexton is chairman of w.p.t. and that is an awesome position. Tony dunst, and vince van patton are doing a great presentation, however it was sure hard to see Sexton as leaving. All so Lyn Gil Martin does an outstanding job also. Joseph Fallon