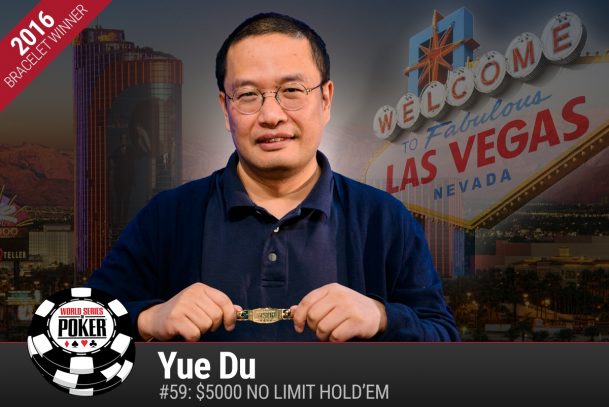 The five-day exhibition will run through April 10 in a software park/resort in Haikou City on the island province of Hainan. It will also be streamed worldwide via 30 broadcasting partners and is expected to reach more than 30 million viewers.

The exhibition will see Lengpudashi, which stands for “cold poker master,” take on top poker pros at heads-up no-limit Texas hold’em. Each day will last ten hours and human players will play two hands at a time.

The human team will be led by Shanghai venture capitalist Alan “Yue” Du, who last summer topped a field of 863 players to win the 2016 World Series of Poker Event #59: $5,000 No-Limit Hold’em for $800,586. In the process, he became the first-ever gold bracelet winner in history from China.

This is the latest human vs. AI competition that programmers hope will further research in “imperfect information” games. Ultimately, Tuomas Sandholm, professor of computer science and the co-creator of Libratus/Lengpudashi, hopes to apply automated decision-making programs to fields such as military strategy, business negotiations, cybersecurity, and medical treatment.

That potential segue will be a natural one for the inventor, as Sandholm has already founded Strategic Machine Inc., which exclusively licenses technology, including Libratus, straight from his CMU labs. Strategic Machine Inc. is also responsible for supplying Lengpudashi for the exhibition.

In the End the Machines Will Win

The above subhead is not only a popular phrase geared toward problem gamblers, it’s also proven applicable to AI in poker.

In 2015, Sandholm developed “Claudico” and pitted it against four poker pros led by Doug Polk, at the time poker’s top-ranked heads-up player. After 80,000 hands, the humans emerged victorious by collecting $732,713 virtual chips, a feat that earned them a $100,000 prize.

The AI came in with a new game plan and won that challenge by taking $1,766,250 in virtual chips from his human competition, a result most concerning to online poker players. While there are a lot of similarities between January’s competition and the latest exhibition, Sandholm is quick to draw some distinctions.

“This is an exhibition, not a match, challenge or competition,” he said. “We are running a relatively small number of hands, so this is not a scientific experiment like the Brains vs. AI competition in January.”

We’ll follow the action here at CardsChat and keep our readers up-to-speed on the results.

Lets build robots that can out think and dominate the human race. Robot number 1 for government!!