Only one woman has won multiple rings this season on the World Series of Poker Circuit. Lena Evans might not be a household name among poker fans, but when you learn a bit about her, there’s no denying she’s one of the more interesting players on the scene today. 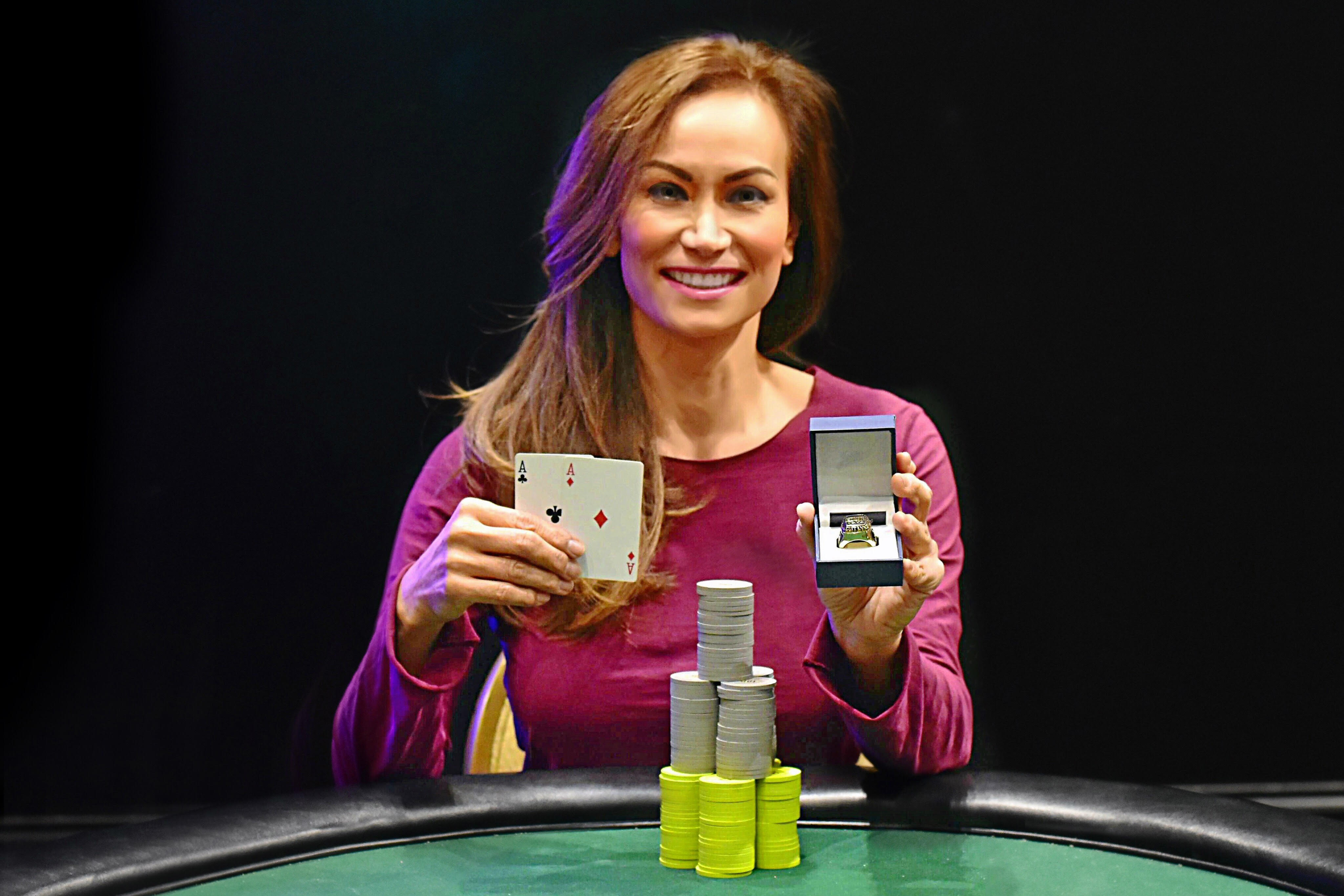 Lena Evans became the first woman in the 2017/18 WSOPC season to win multiple rings, and just the 15th player ever to accomplish the feat. (Image: WSOP)

Born in Saigon to a Vietnamese mother and French father, Evans, 55, came to the United States when she was five. Her family settled in Marina del Rey, California, and as a young adult she found herself in West Los Angeles communities such as Beverly Hills, Brentwood, and Bel Air.

When she got older, Evans became a professional blackjack player who traveled the world plying her trade. That world allowed her to meet such luminaries as England’s Prince Harry, and poker’s Allen Kessler, whom she has known for 25 years. 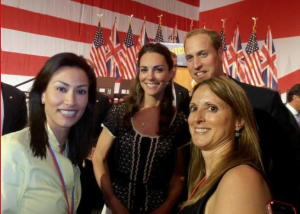 Lena Evans with the Duke and Duchess of Cambridge (Image: Jade Phoenix)

“I was a member of the private gaming organization, London Clubs, and I played blackjack in their exclusive private establishments worldwide,” Evans said. “[They] hosted an invitation-only golf tournament for its top members around the world. I ended up winning the Ladies Grand Prize, which included a trip to the UK for the World Championship Finals.”

During her weekend visit, she dined at Windsor Castle where she was seated with Prince Phillip for luncheon and Prince Edward for dinner. She also played golf at the private Royal Household Golf Club where she ran into Her Royal Majesty. Evans must have made a good impression as she was soon appointed the one and only Chair of the USA for the Duke of Edinburg Cup.

“As such, I organized, hosted, and brought Their Royal Highnesses the Earl and Countess of Wessex [Prince Edward and Sophie] for their first join US visit,” she explained. “Since that time, I formed a strong relationship with the inner circle of the Royal Protection … I was part of the team when The Duke and Duchess of Cambridge [Prince William and Catherine] made their first joint visit to the USA, and I since became closest to Prince Harry, and was involved in a number of his visits.”

Eventually, her gaming and blackjack background led her to poker. 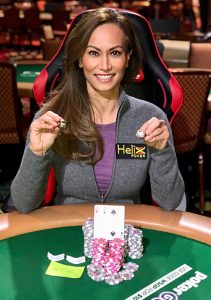 “About seven years ago, I was introduced to poker by a friend, and found I loved the competitive aspect of playing against others as opposed to playing against the house in blackjack,” she told CardsChat. “I became known as a high-stakes cash game player for approximately six years, but in late 2016, I shifted focus to tournaments. Now I am about 50/50 between cash and tournaments.”

The first came back in November when she bested a field of 162 entries to win the WSOPC Planet Hollywood Event #14: $365 NLHE Turbo for $13,122. She defeated circuit grinder Ting Ho in heads-up play to win that one.

“Ting was so incredibly gracious about it,” Lena Evans reflected. “She made the win even more memorable with her kind words after the tournament.  She said, ‘If I didn’t win, I wanted it to be you.’ That touched my heart so deeply.”

Nowadays, Evans is based in San Diego every other week. She alternates between being home when she has her 11-year-old son, and when he’s not she hits the road for poker, business endeavors, and fun.

“San Diego has a very rich poker scene,” said Evans. “The past three years, private home games have exploded, and now you could be at one every night. There are no less than a dozen casinos in San Diego County, which is only 4,200 square miles. My home casino is Harrah’s SoCal Resort. It’s where I host my monthly Helix Poker tournaments.”

“Helix Poker was borne from my passion for the game, and the desire to become more involved with bringing fresh and fun ideas to players and poker rooms, as well as direct marketing opportunities for targeted brand awareness via integration of product placement, directly to poker players during tournaments,” she explained.

In addition, she launched Helix Poker University to help connect pros with students and as a vehicle to advocate for more women coming into the game.

“The only way we can increase prize pools and player fields is to engage more women,” Evans stated. “The best way to engage more women is to simply host more Ladies events. A lot of women want to feel comfortable whilst learning, and that sometimes means playing with other females. I want to support this need and host more lady’s events.”

As for what other players, especially male ones, can do to help feel women feel more welcome, Lena Evans isn’t hopeful.

“There is really no good suggestion to extend to men on how to help women feel more comfortable, because no matter what the suggestion, everyone has their own style, and a lot of men like to be aggressive toward women at the table,” she said. “It would be wonderful if we were all kind to one another, but on the felt, there are no friends, and there is no special treatment for women. And that’s the way it should be in a competition on an equal playing field.” 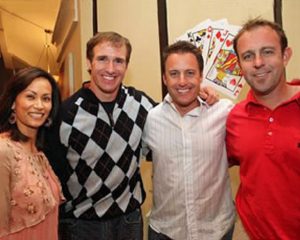 One cannot talk about Lena Evans without mentioning all that she does for charity. Actually, mentioning it all would be an article unto itself. Suffice it to say, she does a lot, including founding the award-winning community organization Jade Phoenix. She’s also won several awards for her philanthropic endeavors including being named L’Oreal Paris Women of Worth, San Diego Magazine Woman of the Year, and Longines Women Who Make a Difference.

“I think my forte is an ability to bring donors to get excited about supporting causes—not only within my sphere of influence but also a wider network.  I maximize my ability to shed light on the causes I am passionate about. The hours are long, but the emotional payback is more than worth it.”

Of course, it’s only natural that she would combine her passion for charity and poker.

“Fortunately, I found a forum to combine my passion for poker and philanthropy by organizing and hosting charity tournaments on behalf of organizations,” she said. “Producing charity poker events is a real joy.”

“I love the poker community, as it has brought me into a world I never would have been exposed to in my life endeavors,” Lena Evans concluded. “It has brought me so much joy and truly meaningful relationships and friendships.”

As for what’s coming up for Evans, this summer she’ll not only be playing a full schedule of WSOP events, she will be holding a female-only class ahead of the Ladies Event alongside RunGood Poker Pro and LFG Podcast co-host Jamie Kerstetter. She’s also primed to earn a seat in the 2018 Global Casino Championship.

Great Article on Lena Evans, She is a Wonderful Lady <3

Thank you for your kind words, @SinCityKitty. xo

It’s a beautiful thing to see a woman playing poker, even better to watch her win a poker tournament, I’m sure we’ll see many more of Lena Evans, and she’s a great player and she did not win at random. That’s not her first win, look for some video about her on you tube and I thought she was an excellent player who has a lot of experience, it’s time for a woman to win the world poker series, hopefully one day, I would be very happy

Thank you for your kind words, @MackMasterSS! I keep trying to improve, study, practice–and I hope one day…a bracelet to go with the two rings…xo