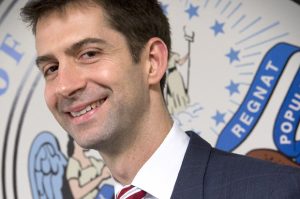 The Restoration of America’s Wire Act (RAWA) is back. Or, at least, something a bit like RAWA is back. Last week Senator Tom Cotton (R-Arkansas) introduced bill S.3376 to the US Senate, a piece of legislation whose ultimate aim is to ban online poker at a federal level. Co-sponsors are Senators Mike Lee (R-Utah) and Lindsey Graham (R-S. Carolina), both longtime RAWA supporters.

We don’t know exactly what S.3376 is yet, as the language of the bill has not yet been published. A brief description of the bill confirms a RAWA-like distaste for a 2011 DOJ judgement that reinterpreted the Federal Wire Act to permit the online poker and casino games in the US.

S.3376, according to the short description on the Congressional website, is: “a bill to ensure the integrity of laws enacted to prevent the use of financial instruments for funding or operating online casinos are not undermined by legal opinions not carrying the force of law issued by Federal Government lawyers.”

The 2011 judgement paved the way for the regulation of online poker and casino gaming to take place on a state-by-state basis, as it has is Nevada, New Jersey, and Delaware, much to the irritation of Sheldon Adelson and his cronies in Washington.

RAWA sought an outright ban for online gambling in the US, with no carve-out for the states that had already been regulated. Thus, it would have dismantled the state’s fledgling online gaming sectors and the millions already invested in them. It also would have banned online lotteries, which a dozen or more states have already legalized with several more considering the idea for their own states.

RAWA was defeated in the legislature at the end of last year, as it failed to gather significant support largely because of its disregard for states’ rights.

But in May, Senator Graham attempted to sneak something very similar onto a huge Senate appropriations bill in the hope that no one would notice, as did his colleague in the House, Representative Charlie Dent. The amendments were indeed noticed, however, and duly struck off, but the incident highlights the need to be vigilant.

Dent was one of the authors of UIGEA. In 2006, at the zero hour, he helped sneak it into the unrelated Safe Ports Act, a bill that wasn’t about gambling at all, but instead, as its name suggests, a series of measures designed to increase security at US ports.

The Congressional website states: “Bills are generally sent to the Library of Congress from GPO, the Government Publishing Office, a day or two after they are introduced on the floor of the House or Senate. Delays can occur when there are a large number of bills to prepare or when a very large bill has to be printed.”

That means we should know the exact language of this bill within a few days, but until then we can safely assume that this is RAWA 2:0.