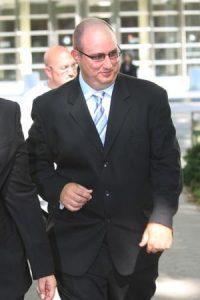 Staten Island, NY poker game host Lawrence DiCristina was exonerated back in 2012, but the conviction was reinstated in 2013; now the Supreme Court may consider the issues (Image: Spencer Burnett/NY Post)

A petition that addresses the legality of hosting home poker games is being reviewed by the United States Supreme Court this week. A decision to take the case or not will then be made, giving the issue the potential to be the first poker-focused case heard by the Supreme Court. It will likely be a decisive event for anyone who has ever thought hosting a game from their home was a perfectly harmless activity.

Defining the Legality of Home Games

Playing poker at home might have occupied little less than a legal grey area for most; but according to the Internet Gambling Business Act (IGBA), the issue is actually black and white. Whether or not the IGBA applies to poker was a central issue behind the case of Lawrence DiCristina, a man from Staten Island, New York, who was tried in federal court for hosting poker games out of a warehouse in his bicycle shop.

DiCristina was arrested in 2011 and convicted in 2012 by the U.S. District Court, when it was determined that poker was illegal under the IGBA. The judge who tried the case, Jack Weinstein, overturned the conviction when a motion after the trial determined that poker was a game of skill, therefore not illegal under the IGBA. For the 92-year-old senior judge, it was an important ruling: separating poker from other forms of gambling.

However, the decision was overturned in August of 2013 by the U.S. Second Circuit Court of Appeals, and the conviction was reinstated. The Court declared that if a game fell under the umbrella of illegal gambling by state law, then the IGBA came into effect. The upcoming petition claims that a court’s decision to say the IGBA applies to state law is wrong. It also questions whether or not any “including-but-not-limited-to” clauses in the IGBA provide non-limiting examples to the term of gambling, or restrict the terms from being defined as gambling.

Despite support from the industry, chances of any forward momentum still might be tricky.

“Any appeal to the Supreme Court is a huge long shot,” said Director of Litigation Support for the Poker Players Alliance, Patrick Fleming. When speaking to the importance of poker, Fleming said, “It can’t be put up there with issues of supreme national importance where you think the Supreme Court is definitely going to take the case up. But I’m not completely pessimistic, as it is an interesting issue and somewhat novel, and sometimes that helps in petitioning the Supreme Court.”

Getting an issue regarding poker to rise through the Supreme Court will require the approval from at least four out of the nine justices. But just because it isn’t a “matter of national importance” doesn’t mean the petition will fall flat. Judge Sonia Sotomayor has expressed her enjoyment of poker and that she has also hosts a regular home game— so certainly the matter hits home with her. If any justices wanted to approve the motion but it was still declined, the outvoted justices are able to write out their opinions on why the Supreme Court should have approved the case. Regardless of the end result, such a high-profile case could do nothing but help poker’s struggle, especially as it pertains to widespread acceptance and discussion.

grown men telling other grown men what they can and can’t do even when it hurts nobody!

I will not claim that poker or any kind of gambling leaves all parties unharmed. But that is really not the issue. Athletes of every sport other than gambling do not have a 100% harm free history. The issue in its entirety is ‘FREEDOM’. I do not support a government dictating their newfangled version of what ‘freedom’ means. Even IF no skill is involved at any form of gambling, I don’t feel its any of their business to restrict or create a menu of how OTHERS are allowed to enjoy their PERSONAL time. Its not an unlawful act to fail with poor business decisions. Laws to protect the populace who gamble should be focused towards cheating or misrepresentations of false odds. The choice to face odds one way or the other is simply whoever’s own choice. Where Nevada battles for rights to remain the most exclusive Monopoly for gambling, a government that allows this is no better a government who restricts a persons choice of career. Government contracts and laws guarantees certain occupations success. If I want to try my luck, who should have the power to dictate a choice above mine? Don’t tell me I’m FREE when allowing me to only walk backwards.