March will be a huge month for tournament players in Vegas with an incredible slate of events throughout the month. This will be the biggest month for poker in Vegas outside of the World Series Of Poker in 2022. And the lifting of the mask mandate in Nevada should bring in even more players to feast on the big guarantees some of these series are offering.

Continuing on from February, the Wynn Millions runs through March 20th. The million dollar guaranteed $10,000 buy-in event starts March 3rd and features multiple starting days. This event will also be broadcast on PokerGo.

The rest of the Wynn Millions series for 2022 will feature buy-ins from $400 to $1,100 with the excellent rake and blind structures that we’ve come to expect for mid-level buy-ins in Vegas. If you haven’t been to The Wynn, you can expect a beautiful room, excellent staff, and great food options nearby.

The Wynn usually brings in respectable fields, though not the huge numbers that we see from the WSOP or The Venetian. The ambitious guarantees for this series should draw in a ton of players generating bigger prize pools than in previous years. We expect a full room and you may want to register early to avoid being an alternate because space can be limited. 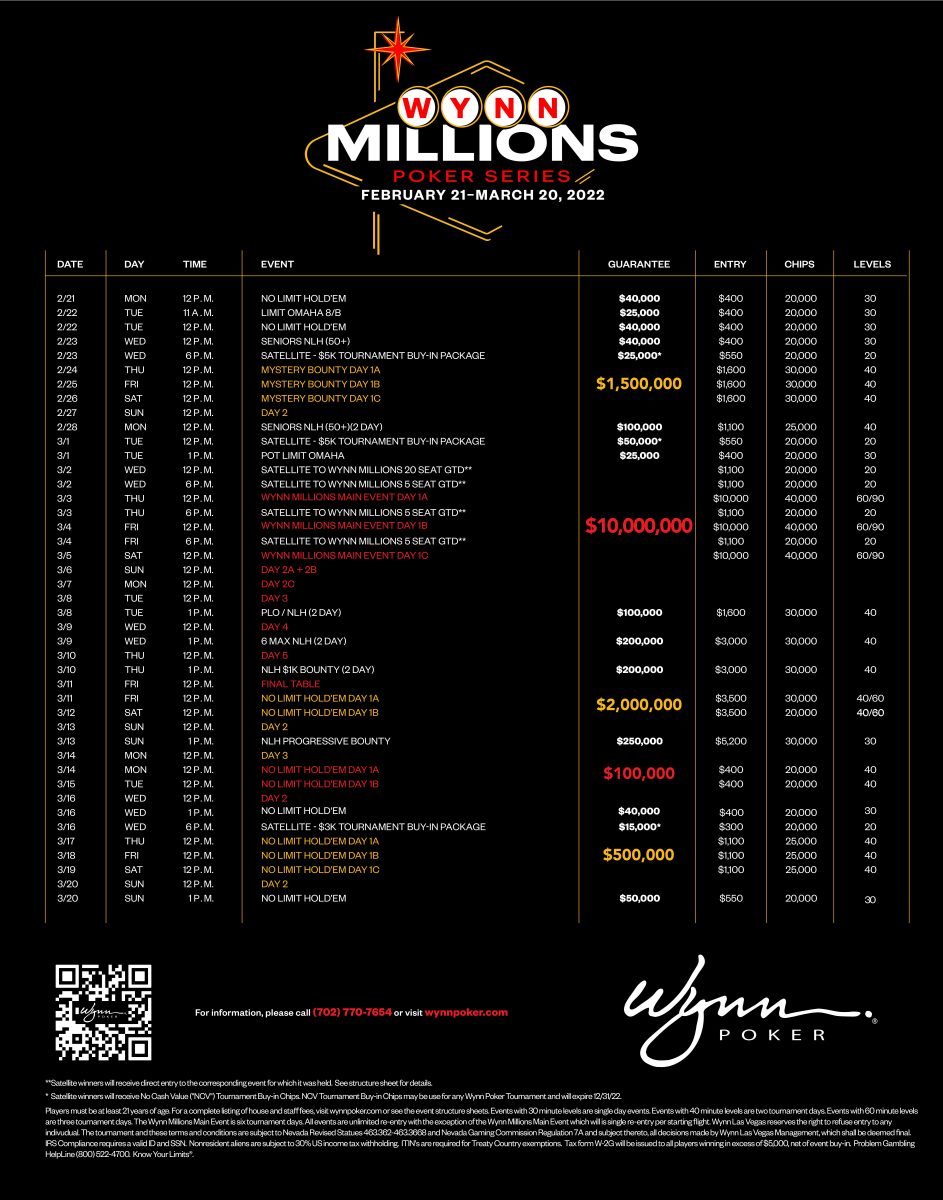 Running for almost the entire month of March, the DeepStack Showdown features everything we’ve come to expect from The Venetian, big fields, great structures, and a solid staff. Players haven’t forgotten that the Venetian Deep stacks brought good structures to Vegas and other poker rooms were forced to follow.

Most of these events feature buy-ins from $300 to $800, with some higher buy-ins on weekends. Almost every event has a solid guarantee, and even with all the other series running you can expect The Venetian to crush those guarantees.

If you are looking for smaller buy-in events that still offer a nice structure and don’t eat up half the prize pool with rake and fees, The Orleans has you covered in March with an excellent series for those of us without a huge bankroll. Buy-ins mostly range from $150 to $500, with an ambitious $800 event on March 31st with four starting days and a $500,000 guarantee.

We also love to see unique tournament formats, and the March Mania series includes HORSE and ROSE events and even a Run It Twice tournament that should really bring out the gamblers.

Rooms should be very affordable at The Orleans all month if you’re coming in from out of town and want to stay where you play, with the possible exception of the weekends during the March Madness basketball tournament. The Orleans has become one of the busiest poker rooms in town over the last few years, and the room will be filled with cash game players if you bust out of a tournament and want a shot at winning some extra lunch money. 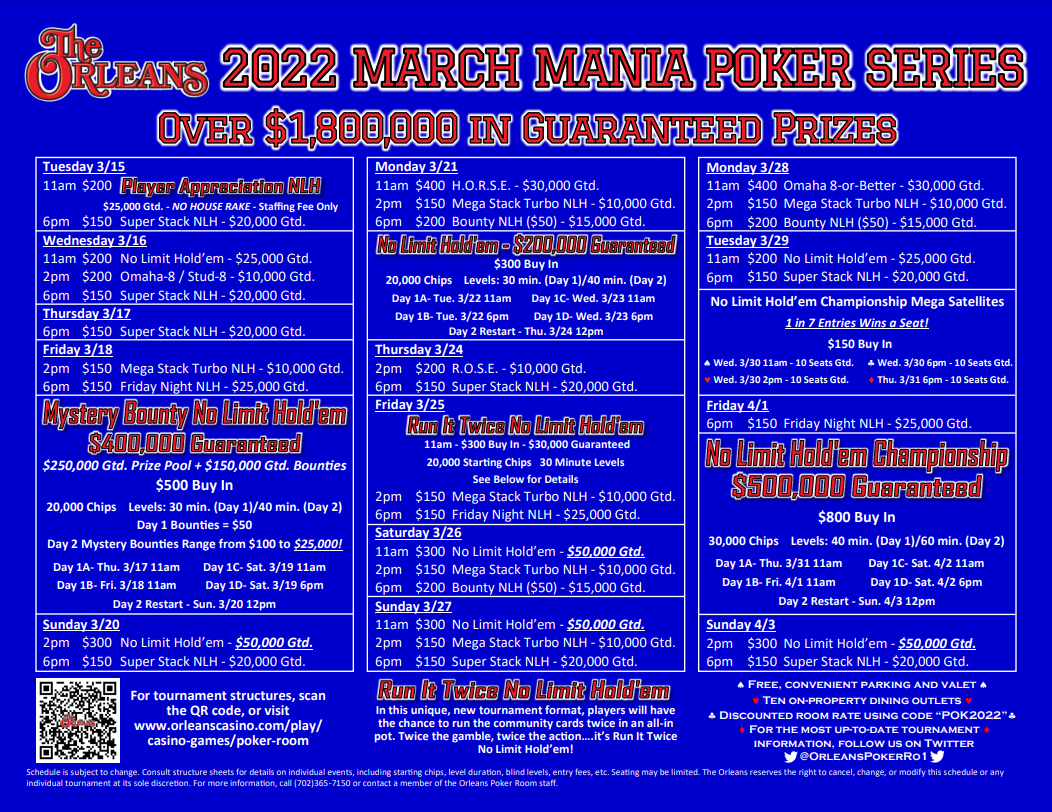 The WSOP Circuit always brings in nice crowds, and even with so many other events running in close proximity we expect to see a big crowd of players chasing those circuit rings. This season the rules have changed so that every ring winner gets a seat in the national championship, meaning that events that typically have smaller fields, like the Omaha/8, HORSE, and PLO, should draw some extra players.

Most buy-ins are either $250 or $400, with a few larger numbers in the middle of the series. The senior event on the 28th should be a big draw as they always are in Vegas. With so many players in town for the various series we expect a good number for the main event as well and it should blow past the half-million dollar guarantee easily. Click HERE for the full WSOP Bally’s 2022 Circuit stop schedule.

You’ll have real trouble finding a more beautifully appointed poker room than Aria, a fitting venue for a high-roller series like The US Poker Open. Many of the final tables from these events will be broadcast in the PokerGo studios just around the corner. Buy-ins range from $10,000 to $50,000 and you can expect shark-filled waters as some of the best players in the world typically play these events. 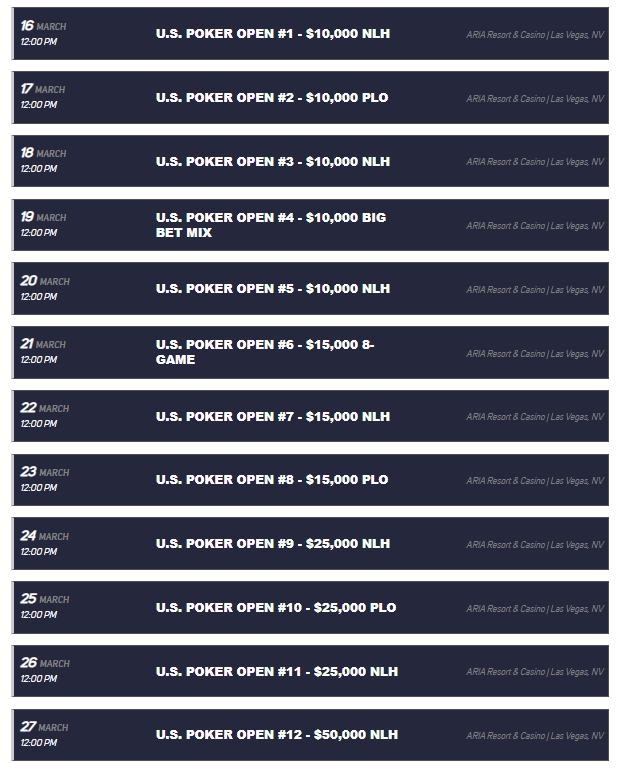 That’s right, another Venetian event that starts as soon as the previous series wraps up. This is standard stuff for The Venetian these days, with a tournament series running most of the time, which is great for local tournament grinders. We’ll talk more about this series next month, but here’s a link to the schedule for the 2022 Venetian Deep stack Extravaganza II.