Courageous, insane, or has too much money? Tom Brady and Bill Belichick have teamed up to win five Super Bowl titles the past 15 seasons, but an unknown gambler with some brass stones made a “multi-million-dollar” wager in Las Vegas on the Philadelphia Eagles to beat the 5.5-point spread against the defending champion and favored New England Patriots. 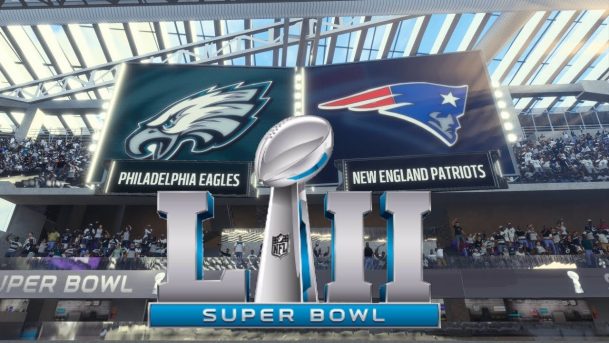 A heavy bettor in Las Vegas has a ‘multi-million-dollar’ wager on the Philadelphia Eagles to beat the 5.5-point spread in the Super Bowl against the favored New England Patriots. (Image: YouTube)

MGM vice president Jay Rood told ESPN that one of his casino’s regulars placed the multi-million-dollar wager. It is against company policy to release a customer’s name without permission.

Rood wouldn’t say exactly how much this individual bet on Philadelphia at +5.5, but confirmed it was more than $1 million.

After the bet was placed, the unbalanced money on Philadelphia’s side forced the MGM Grand sportsbook to drop the point spread to New England -4.5 in hopes of generating more action on the Patriots. The line is holding steady at -5 at most Las Vegas sportsbooks as of Friday morning, nine days from kickoff.

“I’ve had inquiries for some big bets,” Rood told Business Insider. “Last year, on Saturday and Sunday, we took probably a record number of six-figure wagers. I’m thinking the same kind of thing is going to happen this year.”

What are the Odds?

Although betting against the seemingly unbeatable Patriots is risky, the unknown gambler has a bit of history on his or her side.

Tom Brady, a surefire future first-ballot Pro Football Hall of Fame selection, is making his eighth Super Bowl appearance. The combined final scoring margin in his previous seven outings is just 20 points, for an average scoring margin of 2.85 points, below the 5.5 points the multi-million-dollar bettor got on Philadelphia, a stat that may have impacted his or her decision.

In last year’s Super Bowl, the Patriots entered as a 3-point favorite but had to rally from a 28-3 deficit against the Atlanta Falcons to cover the spread, winning outright 34-28 behind Brady’s memorable 2nd half performance.

The GOAT vs. The Backup

History may be on the gambler’s side, but there is potentially a major factor working against the Eagles: quarterback play. For the first time during the Bill Belichick era, the Patriots will be facing a backup quarterback (Nick Foles) in the Super Bowl.

And while Foles was remarkable last week in the NFC Championship Game against Minnesota, completing 26 of 33 passes for 352 yards, he hasn’t shown much consistency since entering the league in 2012.

When Carson Wentz went down with a season-ending injury in Week 14, many experts wrote off the Eagles. But the team, behind Foles and a dominant defense that has allowed just 17 points in two playoff games, made it to the Super Bowl without its starting quarterback, something few teams have done in the past.

But does this team have enough left in the tank to beat the Patriots, led by arguably the best quarterback in history, without Wentz? Maybe, but that isn’t what matters to the aforementioned heavy bettor. He or she can still win even if the Eagles don’t, so long as they keep it within five points.

I hope rid guy not only wins, I hope Philly beats them outright!