Despite poker being such a cutthroat game, the community of players is close and they will often donate time or money to charities, especially those that work with animals. 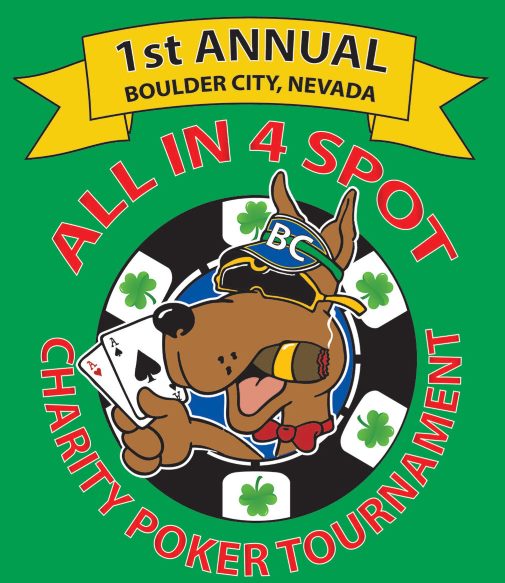 A St. Patrick’s Day poker tournament to benefit a Las Vegas dog rescue group will be all about the green at the tables. (Image: AHome4Spot)

One such event will  be for the Las Vegas dog rescue nonprofit A Home 4 Spot. The “All In 4 Spot Charity Poker Tournament” will throw its inaugural competition at  Milo’s 2-Wheels on March 17 in Boulder City.

The night will feature no-limit Texas Hold’em at 12 tables for 120 players. The buy in is $120 and participants receive a commemorative poker chip, hat, and shirt. Play kicks off at 6 pm.

Rebuys will be available for $100 and if a player chooses to end their evening, there will be an alternate list for rounders who want to participate. The remaining 10 grinders will receive cash and prizes.

The AHome4Spot charity is volunteer-based and provides foster care and medical treatment for dogs, while trying to find them permanent homes in the Las Vegas area. Other features of the evening will be an area for animal adoptions, of course.

“We’re trying to make a big splash and do something that hasn’t been done,” local resident and A Home 4 Spot volunteer Tara Bertoli told the Boulder City Review.

Going to the Dogs

Poker players, as a group, seem to be major animal lovers. No one has demonstrated that more over the years than Jennifer Harman, who has been instrumental in raising the funds for a major renovation that’s now underway at Nevada SPCA, Las Vegas’ primary No Kill shelter.

There were many celebrities amongst the more than 500 attendees including magician Lance Burton, WSOP commentator Norm Chad, popular Pawn Stars character Chumlee, and Bobby Black of the Las Vegas Tenors. CardsChat was a media sponsor for the second year running, and supplied prizes for final table prize packages as well.

The tradition of poker pros and philanthropy is nothin new, of course. Along with Vanessa Selbst and others, it’s pretty much embedded in the zeitgeist of the game these days.

In November 2016, poker aficionado and investor Dan Shak, along with an anonymous donor, doubled any donation made to Raising for Effective Giving (REG), a meta charity that focuses on raising funds for worthy causes.

When Martin Jacobson won the WSOP Main Event in 2014, he donated $250,000 of his $10 million first prize to REG, half of which went to animal organizations.

Well-known pro Liv Boeree started REG in 2014 and now spends more time with that than with the game.

“I’m so happy with how well it’s gone in such a short time,” Boeree said. “Since we founded it two years ago we’ve raised more than $1.5 million for the charities.”

id play if im out there i playeed in a similar one Jenn hosted. i love her and her love for animals