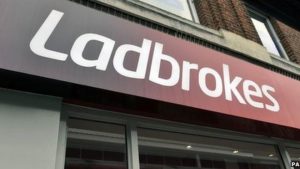 Ladbrokes and Gala Coral have officially announced a merger that will create the largest bookmaking company in the UK. (Image: Press Association)

The world of sports betting is getting a new giant, one that will now be the biggest bookmaker in the United Kingdom. Betting companies Ladbrokes and Gala Coral have officially announced a merger, one that will create a company worth about £2.3 billion ($3.6 billion).

The new company will have tremendous reach in the UK, as it will operate nearly 4,000 betting shops.

While this number will inevitable come down somewhat as the new combined company is forced to sell some outlets that formerly competed against each other, that should still give it far more than William Hill, which is the current leader with nearly 2,400 shops in Britain.

Both brands will still operate under the new company, which will be known as Ladbrokes Coral.

Ladbrokes, being the larger of the two companies before the merger, will see its shareholders own about 51.75 percent of the new company, while 48.25 percent will be held by Coral shareholders.

One of the biggest advantages for Ladbrokes should be in the online realm.

Although the company is a staple in the UK, having operated for 136 years, it has not done as good a job at transitioning that success to the internet as some of its rivals, particularly William Hill and Paddy Power.

But executives say that the new company should have an easier time surviving in an evolving sports betting market than either of the two companies would have had going it alone. According to Ladbrokes chairman Peter Erskine, the move was a vital one for the future of Ladbrokes.

“Together, we will create a leading betting and gaming business,” Erskine said. “The transaction will provide an attractive opportunity to generate considerable value for both sets of shareholders.”

“We’ve both got very bright futures separately, which makes this an exciting proposition,” said Carl Leave, the Gala Coral CEO who will take on the role of executive deputy chairman for the new company. “It will allow us to accelerate our growth strategies.”

This isn’t the first time that the two companies have approved a merger. It happened once before in 1998, when the two sides agreed to a deal that was then voided by Peter Mandelson, the trade and industry minister, on grounds that it would create a monopolistic firm in the bookmaking business.

These days, that is less of a concern. Not only is there more competition when it comes to land-based bookmakers, but online companies like Betfair have also emerged as serious players in the industry, making the overall competitive landscape much healthier.

Analysts were divided on whether or not the move would provide long term benefits for Ladbrokes. While some have suggested that the combined forces of the two companies could lead to growth for the new firm, others thought that some parts of the announcement seemed desperate.

“We think Ladbrokes is in the last chance saloon, having today announced a profit warning, a dividend cut, a share placing and an intended merger,” said Ian Rennardson, an analyst for Jefferies. “We remain skeptical about the merits of the strategic review and proposed merger with Gala Coral.”

The merger shouldn’t have any impact on the poker world.

While both Coral and Ladbrokes operate online poker sites, their rooms were each already part of the iPoker Network.

Combined marketing or a potential consolidation of the sites in the future could have small benefits, but players are likely to see no impact on the available games or player pool post-merger.