The $10,000 buy-in LA Poker Classic final table is set in stone and a pair of past World Poker Tour champions are still alive, with Balakrishna Patur holding the chip lead. 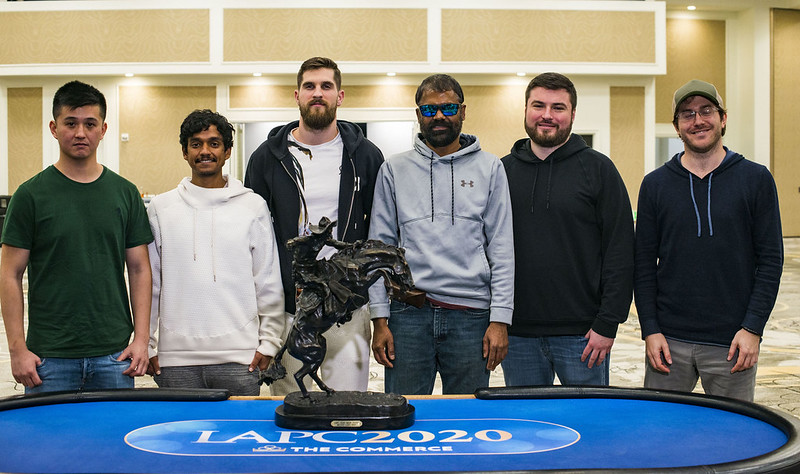 Patur, who isn’t one of the past WPT winners, also finished Day 3 with the chip lead on Monday. His stack didn’t slide on Tuesday’s Day 4, but he did surrender the chip lead to Isaac Baron. On Wednesday, however, he got back to stacking chips and busting players. At the end of the session, he ended play with 6,320,000 chips and a commanding lead.

Now that the LAPC has reached its final table, the tournament will soon move across state lines to Nevada. The final table — scheduled for April 2 — will take place at the HyperX Esports Arena at the Luxor in Las Vegas.

The World Poker Tour began hosting some of its final tables in Sin City last year, including the 2019 LAPC. Many players enjoyed the switch as it gave them an opportunity to fly their friends and family out to catch them in action.

The Esports Arena, which is on the south end of the Strip, will host the Gardens Poker Championship (March 31), Borgata Winter Poker Open (April 1), and LA Poker Classic (April 2). Las Vegas will also host the WPT Venetian, a $5,000 event starting March 31, although that one will run in its entirety at Venetian.

Don’t expect a quick final table at the LA Poker Classic. The six remaining players all have healthy stacks, including three players who will start with over 100 big blinds.

The blinds will resume at 20,000/40,000 (40,000 big blind ante), with Patur leading the way at 158 big blinds. Typically, when a final table starts, a player with that massive a stack holds a huge lead. But there are many other players who can do some serious damage to Patur’s stack in just one hand.

James Carroll, a two-time WPT champion, bubbled the LAPC final table last year and will start in third place at this year’s final table with 4,125,000 chips and 103 big blinds.

The 2020 LA Poker Classic had 490 entrants and is down to just six players, each with a shot at winning $1 million.