The 2017 World Series of Poker Circuit IP Biloxi saw 343 entrants travel to Mississippi’s southern coast and pony up the $1,675 buy-in to play the Main Event. That created a $514,500 prize pool, and in the end Kyle Cartwright took down the $118,332 first-place prize. 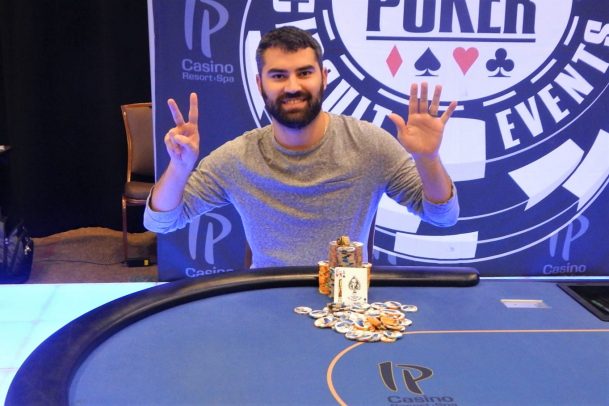 Kyle Cartwright took a break from video poker to play a WSOP Circuit Main Event, and it led to another six-figure score. (Image: WSOP)

The win marked 29-year-old Cartwright’s third WSOP Circuit Main Event title, two of which have come at IP Biloxi (the other was back in 2012). Toss in four other WSOP Circuit side event victories, and the Tennessean has seven gold rings on his poker résumé.

Cartwright made headlines last month, however, playing video poker, when he hit his third royal flush this year, each time in hearts, and each one good for $100,000. The odds of hitting a royal are 40,390 to 1.

In his latest non-video poker tournament, Cartwright entered the final table as the chip leader, which allowed him to freely play his “no holds barred” style.

“I was going to play aggressive because I heard so many guys saying ‘I want a pay jump’ and stuff like that,” Cartwright told WSOP officials after his win. “So, I was playing a lot of hands. I had no playback at me. If they played back at me they had it.”

One player who did play back at him was his heads-up opponent, Timothy Miles. The two battled for more than four hours.

“He is by far the best player I have ever faced heads-up,” Cartwright added. “That’s not even a question. He was tough, but I kind of figured him out after a while.”

Going into the IP Biloxi tournament, Cartwright had nearly $1.5 million in lifetime tournament winnings, which includes a career-high $360,435 for winning a gold bracelet in a $1,000 no-limit event at the 2014 WSOP.

The latest win keeps him in seventh place on Tennessee’s all-time money list behind the likes of Kathy Liebert and Chris Moneymaker, who sit first and second respectively. Unfortunately for Cartwright, chances are he won’t be catching them anytime soon.

“Tournaments, I don’t play too many anymore, but when I do I’m kind of successful,” he added. “I should probably play more, but the cash at home is so good to where I don’t even want to travel anymore. I just stay close to home.”

Cartwright joins Cory Waaland and Josh Reichard as seven-time WSOP Circuit ring winners. Only six players have more than that, with Maurice Hawkins and his 10 rings on top.

The 2017/2018 WSOP Circuit continues now through September 25 at Thunder Valley Casino, which is near Sacramento, California. From there, the Circuit heads to Seminole Hard Rock in South Florida for the first time.