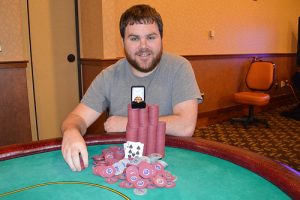 The long, exciting road to the World Series of Poker National Championship is always stuffed with action. Online satellites, live tournaments and months-long circuits are just small steps to the big event.

But these small steps are the perfect way for any kind of player to rise through the poker ranks and ensure their coveted spot at the National Championships. And now another player has grabbed a ride to Bally’s Atlantic City.

Bowker for the Win

The $1,675 No-Limit Hold’em Main Event wrapped up in Chester, Pennsylvania. As the ninth event of the series, over 336 entries came together to create a prize pool of $504,000. Hailing from Walton, NY, Bowker has been on the tournament circuit for around eight years.

“I’ve come close a lot…it’s hard to get a win,” Bowker told World Series of Poker officials after the victory. Over his poker career, Bowker has earned over $2.1 million in live tournament winnings. In the 2006 WSOP Main Event he finished 37th for $247,399, his first big victory. In 2009, he came just short of a ring after finishing in second during with $128,357 at the Harrah’s Atlantic City Circuit Main Event.

The extended second day of the Harrah’s Philadelphia event lasted deep into the morning. Day 3 saw Bowker begin the final table as the short stack with 13 big blinds. The day started off when he moved his stack all-in during the first hand. Bowker’s tabled ace-nine weren’t looking good against Justin Liberto’s ace-jack, but a nine on the turn gave Bowker new life.

Bowker’s once-short stack began to increase in size and his pocket aces went up against Anthony Minniti’s pocket kings. The board played no favorites, and Minniti went out first in ninth place with $10,896. As if he had never been low man on the totem pole, Bowker was now second in chips.

Cutting Through the Competition

Eight-handed play continued for a while, until Bowker took out his next victim. Bowker’s pocket tens eliminated Thomas Cannuli, who had gone all in before the flop with pocket sevens. Cannuli took eighth place with $13,648. Previous ring winner Tim West saw his game cut short by Bowker as well. West was all in with ace-nine pre flop and Bowker showed up with pocket tens again. Community cards didn’t help West whose seventh place spot earned him $17,338.

Antonio Payne’s shortened stack couldn’t hold up against Kevin Saul. Payne went out in sixth with $22,342. Victory wasn’t long for Saul as his ace-ten couldn’t match Justin Liberto’s ace-king. Saul settled for fifth and $29,212. David Bivins saw defeat next as his pocket fives were taken out by Joe Kuether’s pocket aces. Bivins just missed the top three with $38,778.

Though Kuether was chip leader at the start of Day 3, his stack became the smallest as the day drew to a close. Kuether’s ace-queen was looking good against Liberto’s pocket jacks when Kuether flopped a queen. But Liberto quickly came back after turning a third jack. Denied a third Circuit ring, Kuether went home in third with $52,280.

Heads-up play started out with Bowker having a slight chip lead. After a series of small pot wins, Liberto and Bowker met at the final hand. Liberto was all-in with an open-ended straight draw on the flop against Bowker’s middle pair and spade draw. However, Bowker’s pair became a full house at the end of the hand, toppling Liberto who ended up with $71,664.

With Harrah’s Philadelphia in the books, the WSOP Circuit continues at the Lodge Casino in Blackhawk, Colorado. The event is currently running and will conclude on May 5.