“KidPoker,” a much-anticipated documentary detailing the life of one of poker’s most popular figures, Daniel Negreanu, made its TV debut in Canada last night. And although US audiences can, at this point, only view the trailer (which we have conveniently posted below), with sponsor and film presenter PokerStars coming soon to a New Jersey online site near you, you can bet this production can’t be far behind. 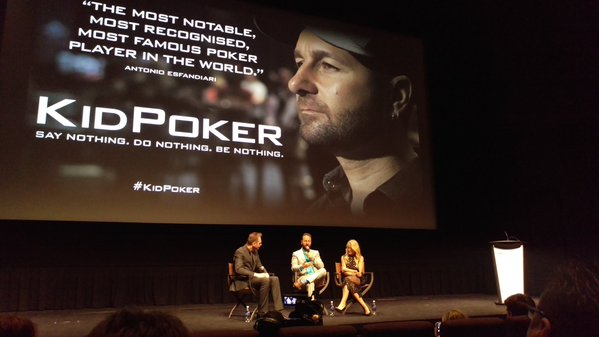 The “KidPoker” documentary, about superstar player Daniel Negreanu and presented by long-time sponsor PokerStars, aired last night in Canada and gave viewers a glimpse into the life of one of the game’s top performers. (Image: Twitter)

Love him or hate him, Negreanu is a fascinating, if polarizing, man. His $30 million in live tournament winnings may never be matched, but the 2014 Poker Hall of Fame inductee didn’t become famous solely from his uncanny knack for reading players.

Often very outspoken, he can rub some people the wrong way. He isn’t afraid to speak the truth or, at least, the truth as he sees it.

Fans have seen Negreanu compete on TV numerous times over the years, heard him rant about issues ranging from the Howard Lederer files to his vegan lifestyle, and watched numerous interviews from the poker icon.

But, as those who have viewed the documentary say, the world doesn’t truly know Daniel Negreanu until seeing the film. Thus far, only Canadian residents have been able to watch, and no international release date has been set.

Producer Francine Watson was a production manager on the European Poker Tour for six seasons, according to her IMDb. We couldn’t find any credits for fellow producer Gary Davis.

What We Do Know

Daniel Negreanu is often considered a top ambassador for the game at which he is such a master. When CardsChat spoke to ESPN WSOP commentator Norman Chad recently in an exclusive interview, he praised Negreanu for his understanding of how a poker player should act at the table.

KidPoker, his long-time PokerStars account nickname, is openly vegan, despises Howard Lederer and Annie Duke, is close friends with recent Hall of Fame inductee Jennifer Harman (he attended her annual fundraising tournament for NevadaSPCA in November in Las Vegas, and is also an animal advocate), still brings his mom’s meals to the poker table, and has six WSOP bracelets.

There are many similarities between Negreanu and “Poker Brat” Phil Hellmuth. They both have won at the highest levels, and share a reputation for stirring up controversy.

Hellmuth stirs the pot by acting in what some deem as a childish manner at the poker table. Negreanu doesn’t receive the same criticism. In fact, most consider him a true gentleman at the felt. But he does rub some the wrong way for different reasons.

In 2010, prominent poker pro Andrew Robl had some harsh words for Negreanu following a televised cash game. Robl, at the time, wasn’t as established in the poker world as he is today, and played a tight style on that day that wasn’t to Negreanu’s liking.

Negreanu and fellow pro Tony G informed Robl that his style of play wasn’t conducive to entertaining television. Robl then took to his blog to rant about the Canadian poker star and Tony G. This led to a back-and-forth public dispute.

This past summer, at the Tournament Directors Association (TDA) Summit in Las Vegas, Negreanu took on director Linda Johnson and the organization by criticizing tournament directors for penalizing amateurs and recreational poker players unfairly, as he saw it.

His comments at the summit were disputed on social media platforms and Internet forums, but Negreanu never backed down from his remarks.

But that’s Daniel. Or is it? Those who haven’t viewed the documentary won’t know until they see it. We can’t wait.

I watched it on one of the sports stations a couple nights ago and absolutely loved it! He is truly an ambassador for the poker and will go on for the rest of his life, he is that devoted to changing the way people think of poker players.

He’s the best there is or ever was. Don’t count bracelets to judge who’s the GOAT. That’s what suckers do.