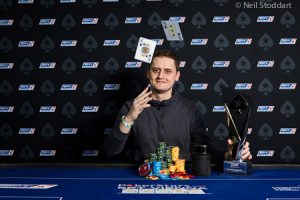 When it was all over, Oleksii Khoroshenin took his place in the EPT winner’s circle. The Ukrainian – who now lives in St. Petersburg – had been in 20th place on the all-time tournament earnings list until this win, which was double the largest win he had ever collected. He now sits in seventh place on that list, with one an EPT title to his credit.

The tournament began on March 23 at the Hofburg Palace in Vienna, Austria. The €5,300 No Limit Hold’em Main Event offered two starting days for players and drew a total of 910 of them. They hailed from 59 different countries and created a prize pool of €4,413,500, equivalent to more than US $6 million.

Khoroshenin was the chip leader at the end of Day 1A, but he lost some ground on Day 2 and finished in 45th place of the remaining 189 players. Day 3 saw the top 135 players burst through the money bubble, and Khoroshenin stayed on the top half of the leaderboard to finish 18th of the 50 players who bagged chips at the end of that night.

Action on Day 4 of the tournament saw players like Jonathan Roy, Marcel Luske, Stephen Chidwick, and Jude Ainsworth hit the rail, and it was a tough day for Khoroshenin, who finished as the shortest of the 17 remaining stacks.

Hope remained alive for the Ukrainian, though, and he caught an early double-up on Day 5 through Umberto Vitagliano, and a later double through Timo Pfutzenreuter kept him in the game. As players like Johnny Lodden exited, Khoroshenin hung on. And when the final table was set for March 29, he was second-lowest in chips of the eight players but still alive, nonetheless.

Action began with the very shortest stack, Mark Neumann, soaring and chipping up to eventually take over the chip lead. Khoroshenin garnered chips of his own by knocking out Rumen Nanev in eighth place and accumulating chips elsewhere. By the time Pfutzenreuter exited in fifth place and Pablo Gordillo left in fourth, Khoroshenin was solidly in the final three with the medium stack.

Neumann, Khoroshenin, and Anthony Ghamrawi agreed to a deal to split the prize money based on their chip counts at the time, while leaving €50,000 aside to add to the winner’s take. They then played on, and though Ghamrawi doubled through Khoroshenin, Neumann lost the most chips and then busted to Khoroshenin in third place.

Khoroshenin took 20.72 million chips into heads-up play against Ghamrawi’s 6,525,000 stack and stayed aggressive. Ghamrawi ultimately moved all-in with 7-6 on a 7-5-4 flop with two spades. But Khoroshenin had two spades as well and caught the third one on the turn to make the flush. Ghamrawi accepted second place.

Khoroshenin didn’t take home the most prize money because of the aforementioned deal, but the €578,392, which was equivalent to more than US $795K, was substantial for the Ukrainian. He also collected SLYDE watch worth more than €5K and the EPT Main Event trophy.

The final results were as follows: