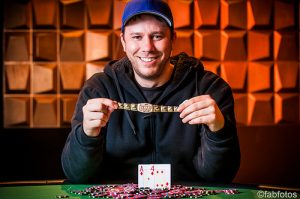 Kevin Macphee picks up his second bracelet of the year as he becomes the fourth North American to win the WSOPE. (WSOP.com)

Kevin MacPhee topped a field of 312 of the world’s top players on Sunday night to take first place in the WSOPE Main Event, his second WSOP bracelet of the year.

It’s over five years since the Idaho native first traveled to Berlin to take part in the EPT of 2010, the event that made his name.

There, he became an overnight millionaire when he took down the million-euro first prize.

And on Sunday night, he was back in the city that made his fortune, staring down five final table opponents from atop a massive pile of chips.

At the start of the final table MacPhee’s stack was around 2.5 times that of his closest competitor, Andrew “luckychewy” Lichtenberger, and he knew the title was there for the taking.

Many of those chips had come from the previous hand of the tournament, some two nights earlier, and had once belonged to eight-time bracelet winner Eric Seidel.

Seidel had run A-K into MacPhee’s aces in a 6-bet pot pre-flop, a rare misstep from a true poker legend that had set up MacPhee to steamroll the final table.

However, in Lichtenberger and JC Alvarado, he would still have to negotiate his way past two of the finest tournament players of their generation.

Lichtenberger, crippled after a tussle with Alvarado, was out next running Q-10 into the unstoppable MacPhee’s Q-Q.

Alvarado was next to fall, unjustly, when his A-K was outrun by Spaniard David Lopez’ A-Q, and the finale was set.

Heads-up and Lopez fought back valiantly, trading blows with MacPhee and, at one point, even taking the chip lead.

All in vain, however, Macphee regained the momentum when he flopped a full house and Lopez made a flush on the river.

The death blow came when Macphee made a wheel with A-4, sucking out on Lopez’ kings when the pair were all-in pre-flop.

“It was an absolutely super-tough end game,” he told PokerNews afterward. “You have legends all around you. I just tried to play my cards pretty close to the vest and just pick my spots really carefully.

“I took a big risk being a kid from Idaho and coming out to Europe, leaving everything behind, including family and friends, and just putting my stuff in storage to come out on tour. That was seven years ago and I’ve been on the road since then. I felt validated when I won the EPT, and yeah, the bracelet was really nice. This is just the icing on the cake.”

“Now I can start to cement my legacy.”