Now that actor/comedian Kevin Hart is coming out the other end of his celebrity sex and extortion scandal, he can get back to one of his day jobs – being an ambassador for PokerStars. With the help of the online site, Hart is reigniting his poker-based feud with champion Olympic sprinter Usain Bolt. 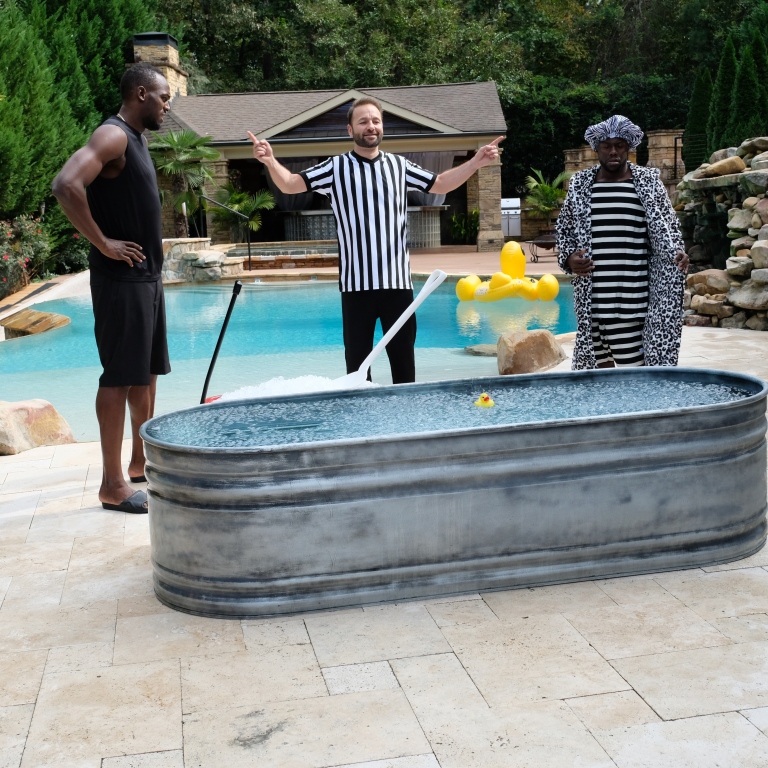 The purpose of this heads-up matchup is to test the core qualities and skills of a good poker player, such as reading opponents, bluffing, aggression. The feud will be documented in a series of social media posts being dubbed #GameOn.

The newest video in the series shows Team PokerStars Pro Daniel Negreanu subjecting the two celebs to an ice bath, which was designed to see who could maintain their emotional control the longest.

The videos will culminate in January at the PokerStars Caribbean Adventure in the Bahamas. That is where the duo will compete in what is sure to be a highly-publicized heads-up match. Details on the match, such as structure and what’ll be at stake, have not been released.

“Usain may be a quick thinker but let’s see what happens when he’s taken away from the track,” Hart said. “If I were a betting man, I’d say I’ll be the one celebrating in the sun in January. It will be so easy, like taking candy from a baby.”

Bolt shot back, “Kevin may be the funniest, but jokes are not going to get him anywhere against me at the poker table. I know how to keep my cool under pressure and that’s what it takes to win, my friend.”

In other Stars Group news, former Tottenham midfielder Gus Poyet became the latest sports star to support the brand. Poyet follows in the footsteps of Liverpool legend Kenny Dalglish by taking a part in the “Big Call with BetStars,” which enlists professional athletes to share their predictions ahead of major sporting events.

Poyet has declared that his former club will finish above Arsenal in the Premier League, but expects both teams to share the spoils at the Emirates Stadium with a 2-2 draw.

When asked who will score the first goal, Poyet said, “Harry Kane, because he’s on fire.” Poyet also suggested that the good money, in this kind of game, would be betting that both teams will score.

As to which team will finish highest in the league table, Poyet didn’t hesitate.

“I’m convinced Tottenham will finish higher,” he said. “I think they are more consistent, and right now they are the better team.”

BetStars is the online betting service and sports betting brand from the Stars Group, formerly Amaya and the parent company of PokerStars.

what a good return for the actor comedian and to return to the best poker room jejej but has a hard confrontation nothing more and nothing less with the Olympic champion hehehe I hope the challenge is competitive, and only see that bathtub with ice and water uff, hahaha very cold to be inside but usaint bolt stayed inside and still from the bathtub jejej

I love these 2 guys , 2 legends in their domain , I’m looking forward to see this video , it will for sure be fun , Kevin Hart looks already preparing for the challenge with his uniform lol and I hope to see these two guys on tables soon especially Bolt , I didn’t see him playing yet .