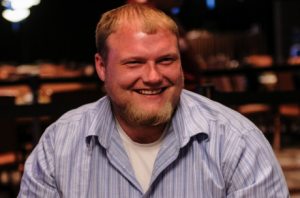 Keven Stammen is no stranger to live or online poker tournaments. The man often referred to on Twitter and online as “Stammdogg” has accumulated more than $2.3 million in online poker winnings to date, and going into the WPT World Championship at the Borgata, his live tournament earnings were just over $2.5 million.

That all changed in Atlantic City, New Jersey, this past weekend. Stammen played in the World Poker Tour’s $15,400 buy-in No Limit Hold’em World Championship tournament, which signaled the end of the tour’s 12th season. And by winning the biggest WPT event of the year, he captured the title, $1.35 million, and soared over $3.5 million in lifetime live earnings.

The World Poker Tour rarely sets guarantees for its live tournaments, but did offer a $5 million prize pool promise for its World Championship. It was the first time the tournament was held in Atlantic City instead of Las Vegas, and the buy-in was lowered to $15K instead of the usual $25K.

It was a reentry event, and when the two starting days were totaled, there were 328 entries, which prompted the Borgata to reduce its own rake to make the $5 million for the prize pool. And since the winner was guaranteed $1.35 million, the WPT added $40K to make that happen.

When Day 2 began, there were 200 survivors, and the action played down to only 68 players. Recent WPT Seminole winner Eric Afriat was the chip leader with a stack of more than one million, and Keven Stammen was in 65th place with only 56K chips.

Day 3 saw the money bubble burst, courtesy of Curt Kohlberg eliminating Michael Lavoie. The final 36 competitors were guaranteed at least $30,085, and some who cashed throughout the night included Jason Koon, Matt Stout, Loni Harwood, Jesse Sylvia, Scott Seiver, and Jeff Madsen. Play stopped with 18 players on two tables, Afriat still in the lead with 2,029,000 chips, and Stammen in the lower half of the counts with 867K chips.

Day 4 of the tournament saw Stammen climb to the top of the leaderboards as players like Eric Afriat and Brock Parker exited. Stammen then eliminated Anthony Gregg in seventh place, which was worth a payout of $189,244.

Stammen took the lead into the final table with 5.65 million chips, with Byron Kaverman in second place with 4.07 million. Abe Korotki was next, followed by Kohlberg, Tony Dunst, and Ryan D’Angelo.

D’Angelo was anxious to double-up and did so just that on the ninth hand via Korotki. The latter then took a shot to double back, but D’Angelo eliminated him in sixth place. Numerous double-ups followed, with Stammen taking a hit from Kohlberg but regaining chips in big pots with D’Angelo. Kaverman stepped up to eliminate Kohlberg in fifth place and then D’Angelo in fourth.

WPT segment host Dunst took his shot with A-2, but Stammen called with K-6 and caught trip kings on the board to send Dunst out in third place.

The shorter-stacked player started strong, though, and took the lead in a matter of a few hands, though Stammen took it back with some aggressive plays. He chipped away at Kaverman, who was eventually reduced to less than 3 million chips. Kaverman moved all-in with pocket fours, and Stammen quickly called with A-8, which improved on the river to a pair of aces and victory. Kaverman accepted second place, and Stammen captured the title, $1.35 million, a Hublot King Power Unico watch, WPT Championship trophy, and gold Monster 24K headphones.