The fourth annual GPI American Poker Awards has been scheduled for Feb. 22 at the ritzy Andaz West Hollywood hotel in Los Angeles on the famous Sunset Strip. PokerStars, the world’s largest online poker site, has signed on as the event’s presenting sponsor. 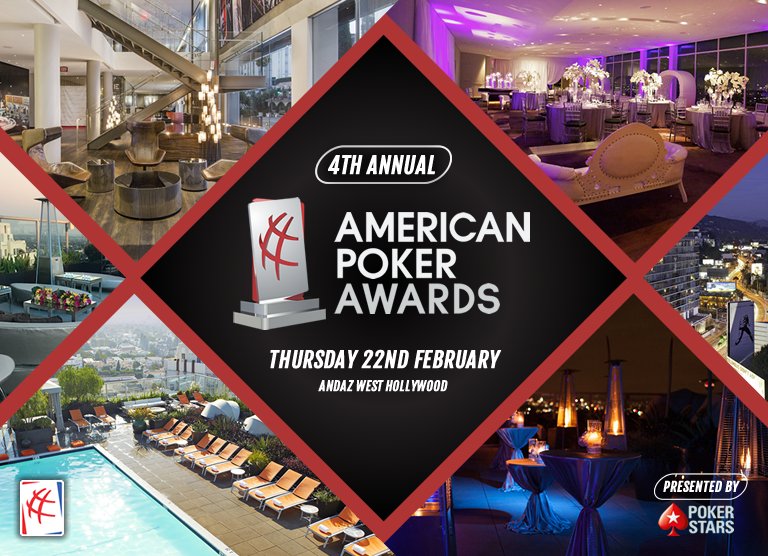 Much like the Academy Awards, minus the politics and about 50 million viewers, the APA’s hand out hardware to winners in various categories.

Alex Dreyfus, president of the American Poker Awards and Global Poker Index, hasn’t yet named the categories for this year’s honors, but a save-the-date press release promised “over a dozen … shortly.”

Last year’s ceremony, which took place in Beverly Hills, saw David Peters walk away with GPI Player of the Year, WSOP Circuit grinder Maurice Hawkins win Breakout Player of the Year, and longtime poker TV producer Mori Eskandani honored with a Lifetime Achievement Award, along with 15 other winners noting accomplishment in poker both on and off the table.

Even though categories are still being decided, the GPI did reveal two of 2017’s biggest winners:

New Yorker Bryn Kenney will be crowned American Poker Player of the Year, and Kristen Bicknell was named GPI Female Player of the Year. Bicknell is from Canada, but so far no one is calling to protest an American award being extended to a North American.

In 2017, Bicknell became a proven world-class player. She cashed in seven WSOP events, and won a $5,200 tournament (for $199,840) at the WPT Five Diamond World Poker Classic in Las Vegas this past December.

Kenney, meanwhile, dominated the tournament scene throughout the year to spend 14 weeks as the No. 1 player on the planet, according to the GPI World Poker Rankings.

Kenney had a successful run in the inaugural Poker Masters high-roller series in September, winning a $50,000 event for nearly $1 million and cashing in another. In between these big scores were numerous six-figure cashes en route to finishing atop the 2017 Hendon Mob Money List.

Dreyfus said he anticipates the European Poker Awards to return this year as well, “if the sponsors are supporting.”

Thank you Jon Sofen and CardsChat I had no idea there were poker awards much less we’re on the 4th annual. 50 million viewers for the Academy Awards I would of thunk much more but that is accurate. Poker is an international game, maybe they named it wrong, being an award is going to a Canadian, but that’s nice, good for her. I look forward to the post award story. BTW, the award itself is hideous looking, lol.

So mark Feb. 22 on your calendar because American Poker Awards will announce winners of “over a dozen” other categories of poker accomplishments.