Last week, Kenneth Strauss – who got himself disqualified from the World Series of Poker Main Event earlier this summer for exposing himself to the table – was indicted on a terrorism charge based on threats he made towards Las Vegas casinos. Now, new details from his arrest report outline the bizarre sequence of events that led to police apprehending him on July 27. 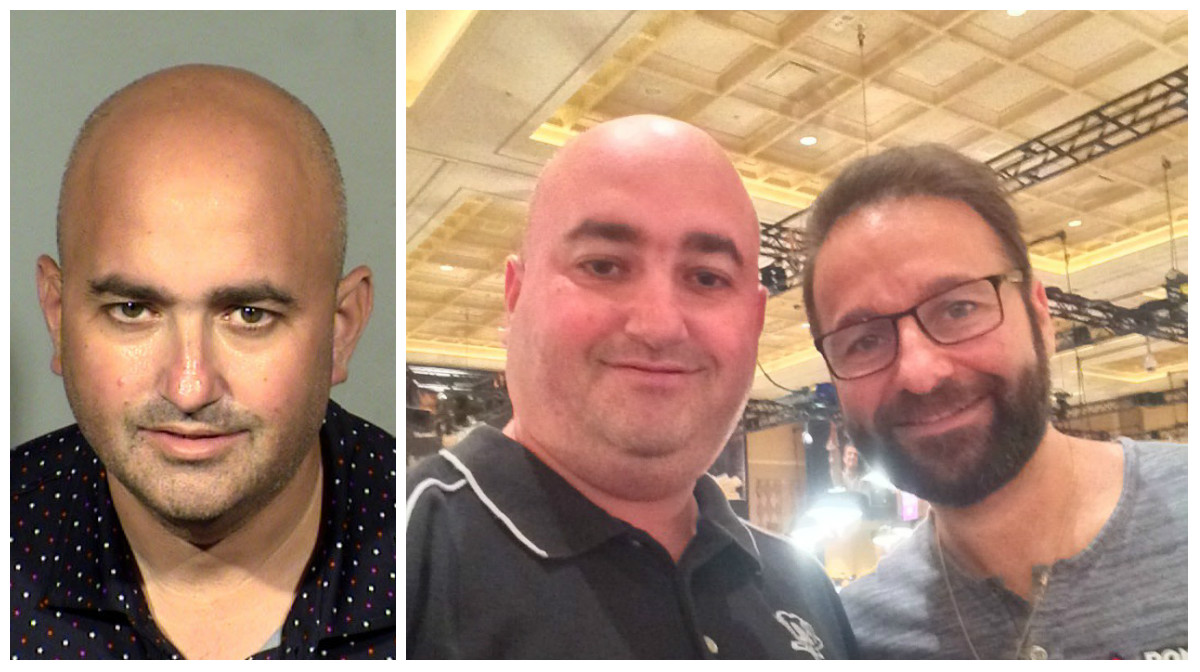 Kenneth Strauss – seen on the left in a police photo, and on the right with Daniel Negreanu at the 2017 World Series of Poker – allegedly had a string of troubling incidents at Las Vegas Hotels prior to his arrest. (Images: Las Vegas Metropolitan Police, Twitter/kpittboy)

According to court records, the 45-year-old Strauss was ordered to be held on $150,000 bond last week after being indicted in District Court on one count of making threats or conveying false information concerning acts of terrorism.

Multiple local media outlets in Las Vegas have reconstructed the events of July 27 – the day Strauss was arrested – based on his arrest report.

Las Vegas Metropolitan Police were first alerted to Strauss at about 8:40 am Pacific Time that day, when they responded to the Red Rock Casino Resort because of an interaction in which Strauss allegedly tried to lure an 8-year-old boy from the pool area at the resort to his hotel room.

When police contacted Strauss at his room at the Red Rock, he claimed that he had thought he recognized the boy from when he lived in Pittsburgh, and that he had given the child his room number so that he and his parents could meet with him later.

That incident had been enough for the Red Rock to kick Strauss out of the hotel. According to the arrest report, Red Rock security personnel also informed police that a private investigator had told them that Strauss was allegedly stalking and harassing an unnamed sports reporter, one that he apparently believes is his daughter from a relationship he had when he was 11 years old.

At about 2:40 pm that same day, Strauss attempted to check in at the Trump International Hotel, explaining to the staff that he had been kicked out of the Red Rock and needed a new place to stay. While that story was concerning, he was still allowed to check in.

Minutes later, at around 3 pm, a call came in to police from the Venetian about a suicidal person – which turned out to be Strauss, who was also a registered guess at the Venetian’s hotel – who had told security that he would harm himself and anyone who came near him. According to the arrest report, Venetian security assigned armed personnel to watch over Strauss’ room, and police conducted a welfare check, only to find that he was no longer at the hotel.

Based on security footage, it appeared that Strauss had left the Venetian at 2:30 pm, taking a taxi to the Trump resort. Around 4 pm, police were able to find Strauss at the Trump hotel and arrest him based on his statements at the Venetian, his behavior while being interviewed, and a series of threatening messages he had made on Twitter.

According to the report, when police asked to see Strauss’ phone, he began deleting messages and other data from the device.

A reasonable person would believe someone guilty of making threats via social media would attempt to destroy the evidence stored on their phone,” the report said, according to television station Fox 5 in Las Vegas. “This is exactly what Kenneth did when provided the phone.”

The arrest report provides more context for a WSOP incident that was originally thought to be the outburst of an inebriated man, but now appears to be just one of many events from a troubled individual. The report noted that after being escorted out of the WSOP by security, he attended a psychiatric hospital until being released on July 15. Strauss was also taken into custody by security at the Aria on July 25 for trespassing.

According to KTNV in Las Vegas, Strauss’ next court appearance is scheduled for Sept. 5.

I believe that people with this kind of attitude should be banned from numerous situations and especially be penalized.

The world would be much better if it had no people who had no character.

Too bad there are so many crazy people!