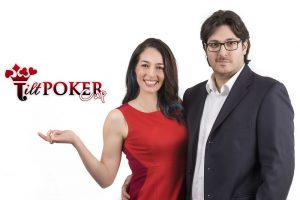 Kara Scott and husband Giovanni Rizzo are joining Tilt Events, a poker organizer based in Italy, as promoters and organizers. (Image: italiapokerclub.com)

Kara Scott wasn’t out of a job for long.

Less than two months after revealing that her five-year relationship as a partypoker ambassador was ending, Scott has confirmed a new role with Tilt Events. Writing on her Cardrunners blog, the 37-year-old says she’ll serve as a consultant and brand ambassador to the Italian poker event organizer.

In addition to ending her unemployment stint, the news offers additional reasons to celebrate, in that her husband, Giovanni Rizzo, will also be joining her.

“Giovanni and I will be joining their team, being involved all the way from the early dreaming stages to the fine detail execution of the Tilt Cup events as well as bringing back, and this is REALLY exciting, the Venice Poker Festival for the end of 2015!” noted Scott of the new gig.

The well-liked pro had worked for several UK media outlets before landing the partypoker job in 2009. After marrying Rizzo in 2013, the two relocated to his home country of Italy, residing in the northern town of Parma. The Tilt Events opportunity will have the added benefit of cutting down on her international travel, as the company is primarily focused in Venice, just 160 miles away.

Tilt Events (not connected in any way to Amaya Gaming’s Full Tilt) organizes poker events in Italy, and bringing the lively and energetic Scott on board will give added credibility to the group, as the country continues to experience substantial gaming growth.

For Scott, it’s a dream come true. She’s made no secret of her love for the Venice, often referred to as the City of Bridges, saying, “I am a firm believer that it is the most magical city ever created. It introduces you to people and leads you to places you don’t expect.”

Before she settles down in her new gig, Scott’s upcoming schedule is a globetrotting affair. She’ll host the American Poker Awards on February 27th in Beverly Hills, and then travel to Malta for the Global Poker Masters March 21st to 22nd and the European Poker Awards March 25th.

Born in Canada, Scott’s lengthy gaming resume is one of the most impressive in the business.

Her career began with GameTV, a Canadian channel specializing in casino programming. She hosted the first televised backgammon series before moving across the pond, then found her niche hosting the award-winning “Poker Night Live” and quickly immersing herself in the game.

From there, she’s become one of poker’s most revered personalities, leading to her sideline reporting at the World Series of Poker and becoming an ambassador with partypoker.

At the WPT National Venice Main Event last March, Rizzo finished 4th for a cash of $32,612, his largest take in nearly four years. Together, poker’s only married couple representing the same company will most certainly increase brand awareness for Tilt Events.

Editor’s note: Kara Scott will be the first in an exciting news interview series on Great Women of Poker we are kicking off this year for CardChat. We plan to track her down to chat about her new gig, life in Venice, and everything else that’s in store for 2015. Stay tuned.

Kara Scott is a fantastic poker ambassador, and I wish her all the best in her new deal with Tilt.

the most hot woman in poker community