When Justin Bonomo won the 2018 Big One for One Drop, his $10 million first prize made him the winningest tournament poker player of all time. It also meant a lot of cash for his backers, some of whom are now questioning just how much money they’re entitled to. 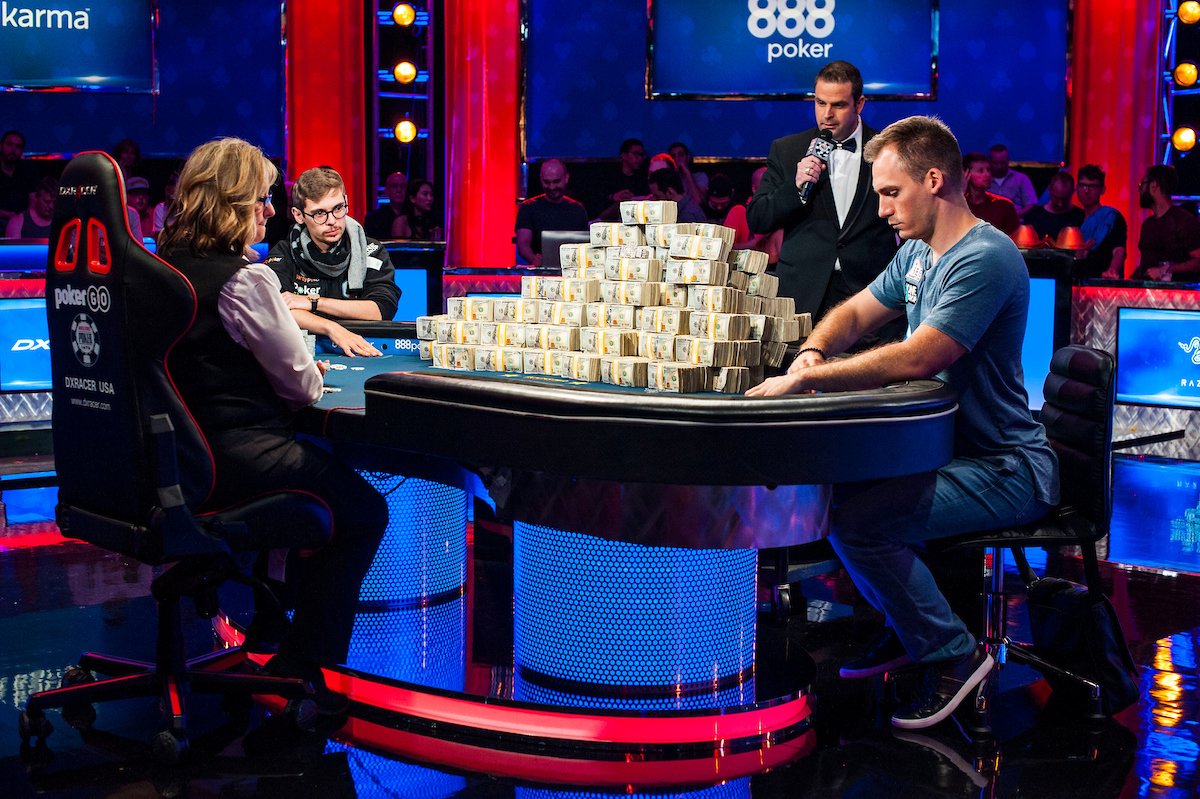 Justin Bonomo (right) and Fedor Holz compete heads up at the conclusion of the 2018 Big One for One Drop tournament. (Image: Joe Giron/WSOP)

Questions over how those who backed Bonomo would be compensated were raised after he posted a message to Twitter on Friday night, detailing a deal he made with Fedor Holz before heads up play began.

Bonomo Details How Chop Went Down

According to Bonomo, he decided to make details about the agreement public because of the hundreds of people who had bought pieces of his action on YouStake, the online service that acts as a crowdfunding site for backing professional poker players in tournaments.

“Fedor and I chopped half of the prize pool when we got HU and played for the other half,” Bonomo wrote. “My final share was: $8,751,111. I discussed how this would work with Scott from YouStake before the FT and he said I should wait until I get paid before announcing it.”

The fact that Bonomo and Holz made a deal is hardly shocking, especially considering how much money was at stake: the difference between first and second places was $4 million. And viewers were still treated to a fascinating heads up battle, so there were no complaints about the play as there were during the $100,000 High Roller earlier at the World Series of Poker.

But many observers felt that the agreement was problematic when it comes to what YouStake backers should expect to win. Since the WSOP doesn’t facilitate deals, Bonomo still officially won $10 million, and many believe that’s the amount backers should be paid from.

“Thanks for the great ride, Justin,” wrote Tom Smith, apparently one of Bonomo’s backers, in a reply to his announcement. “It seems to me, though, that we should be paid based on published results from the WSOP. 235 backers have no real idea what you guys agreed to. All we have is what the WSOP says you won.”

Others questioned whether YouStake had the right to take the deal into account when paying out the backers, or how Bonomo’s decision to make the deal public might impact what Holz’s backers would receive.

But despite the controversy, most of those responding to Bonomo’s announcement were happy to have made a great return on their investment, with many praising his transparency.

“Congratulations on the win,” replied @417Shrink. “This experience and what you’ve posted publicly has made me a bigger fan.”

Bonomo’s announcement wasn’t just about how the deal would impact those who backed him. He also confirmed that he had made a $75,000 donation to One Drop, an amount that included the entirety of the markup he charged to his backers.

“Normally I wait until December to make donations for tax reasons, but as this was something I had promised publicly, I wanted to do it right away,” Bonomo wrote.

With his victory in the Big One for One Drop, Bonomo now has over $42.9 million in lifetime tournament earnings. That puts him more than $3.3 million ahead of Daniel Negreanu at the top of the all-time money list.

Is it shady to make a deal when heads up if you got backers who expect their share of 1 place prize when you win. I have to say yes. By Justin making a deal he is robbing his backers of what they are entitled to.If Justin gets 10 million for 1 st and comes in first place. The backers should receive their piece of 10 million regardless if he made a deal or not. The backers are losing money when Justin does this. So Justin should have to pay the difference if there is one & there is.

I clearly would be upset if I had a 5 percent piece of him which would be 5% of 10 million not $8.75 something like that after the deal heads up. So him making a deal would clearly put me at a loss if I was a 5 percent backer.I would lose over $50,000 dollars cause he decided to make a deal. I would still want my money regardless if he made a deal. My 5 percent would be from first place winnings 10 million not the deal he made. That’s my opinion

JB that seems greedy and silly to me. you would get 5% of his winnings period.
he has a right to deal for his best interest and I believe it’s also for the best interest of his backers.
if he got 2nd would you be happy with the 5% of announced 2nd place prize? JMO 🙂

Your a idiot if he had lost and had made a deal you would want 5 percent of the 8.75 million

This may seem a bit shady in some cases but in One Drop. It is 4 million. If you were his backer and you saw he had 2-1 chip disadvantage with a deal on the table that would only effect 12% 1st prize payout where you “arent” the probably winner. All his backers should consider probable odds. What was the likely situation in his position? Say if he came second and won only $6 Million with no deal? In this scenario I am certain if you had any logic you would expect him to take the deal as well. Take into account that the difference was a whopping 4 million not a few $100,000 like any standard tournament. 12% would seem like a steal for a compromise of 1st place equity in Bonomos position. I think because there was 100s of backers your probably better advised to leave a disclosure for chops when you make a deal like this.