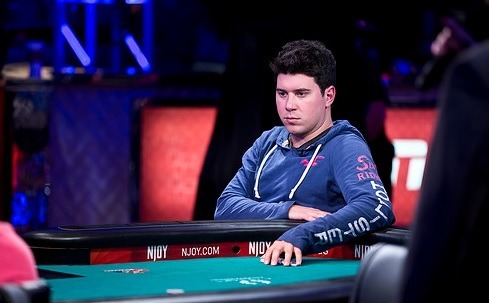 November Niner Josh Beckley now has a WSOP Circuit ring, and will be pushing to get a bracelet to go with it at the WSOP Main Event. (Image: WSOP/Jamie Thomson)

The $365 buy-in “Monster Stack” take down earned Beckley a WSOP ring, and the 24-year-old New Jerseyan will be hoping he can complete the jewelry set come November.

Beckley will start out seventh in chips at the WSOP Main Event, with 11.8 million in chips (29 big blinds), and is guaranteed at least $1 million.

Despite this, he hasn’t let the big time change him, which is why he can still be found playing small buy-in events with the rest of us mere mortals.

The Monster Stack wasn’t a useful exercise in the kind of shortstack play Beckley will need to master if he is to triumph in November, though. He began the final day as the chip leader with 17 left and never looked back.

He was still the chip leader when he went into heads-up play with Aric Pluskat, enjoying a dominating chip advantage over his opponent. His cards were keeping up their end too, with all the money going in with Beckley holding A-Q and A-J for Pluskat.

“It’s definitely an ego boost,” Beckley told WSOP media in Florida after the win. “It makes me more confident with my game. It might also show the other [November Niners] that I can win a tournament.

“It’s basically final table strategy,” Beckley said, when asked how he thought this tournament might help him in the Main Event. “The money is different and people are playing differently here, but I still have to consider a couple things. I think I’m fine tuning for the [Main Event].”

“I think one double up, and I’m in good shape,” he said, on playing with a short stack. “I was very short a couple of times in the last couple of levels [in the Main Event]. I think I chose my spots well and got it in as good as I can.”