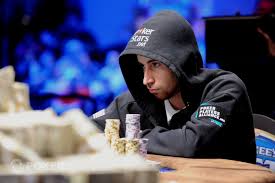 Those that said Jonathan Duhamel winning the 2015 World Series of Poker Main Event in 2010 may want to reconsider. Duhamel has since been on a crash course to stardom and doesn’t appear to be letting up.

The 28-year old Canadian poker star just added another title to his belt. Duhamel took down the final event, a high-roller tournament, at the WSOP Europe.

More important than the money, the victory gave Duhamel his third career bracelet.

Although Duhamel has a Main Event title, perhaps his most impressive win came this past summer in the High Roller for One Drop.

Duhamel had to earn his victory at the WSOP Europe High-Roller Event #10. The final table was stacked with talented and accomplished pros.

Kitai flopped a flush draw and needed either a spade or Jack on the turn or river to double-up. He had no such when a non-spade 2 and 7 were turned over on the turn and river.

Kitai won’t be going back to Belgium empty handed. He picked up €342,620 and increased his career WSOP earnings to $1,716,915. Had Kitai ousted Duhamel, it would have been his fourth career bracelet.

Unfortunately, for Kitai, the man of the hour is Jonathan Duhamel. Not only did Duhamel win some big bucks and a bracelet.

He also increased his career live tournament earnings excluding his Main Event title to over $8 million.

The victory didn’t come easy. With four players remaining, Duhamel was stuck with less than half the stack of chip leader, and talented poker pro, Mustafa Kanit.

Duhamel didn’t win his bracelet without a bit of luck. No one does. There were a couple of hands at the final table that were the most crucial to his victory.

The first key hand came with four players left. Duhamel picked up pocket 10’s and raised all-in pre-flop for 635,000. He was called by previous commanding chip leader Mustafa Kanit, who was holding A-8.

Duhamel’s pocket pair held up and changed the complexity of the final table. The next crucial hand was dealt when he was heads-up with Kitai.

After the 9 of hearts flipped over on the turn, Duhamel put in a bet of 425,000 and received a call.

The 9 of spades came on the river. Duhamel shoved all-in and did not get called. This hand gave him a commanding 4:1 chip advantage. The rest is history.