Season 7 of the Mid-States Poker Tour (MSPT) came to a close this past weekend with an $1,100 Main Event at Canterbury Park in Shakopee, Minnesota. The tournament drew 464 entrants (213 on Day 1a and 251 on 1b), which made it the second-largest major poker tournament in the state’s history. 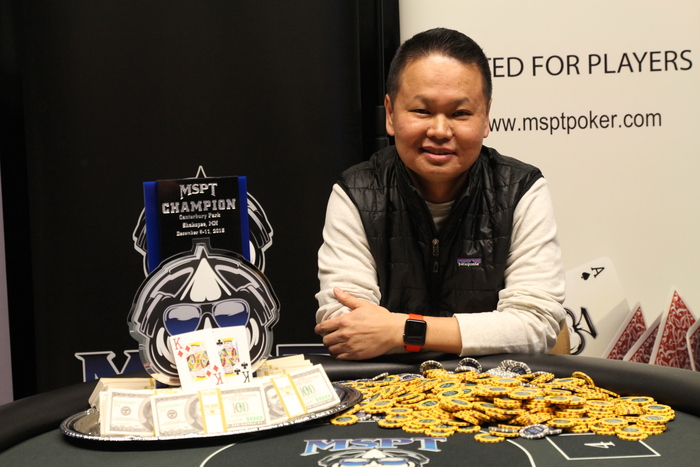 “It’s been a long time coming,” said Kim, who qualified for the tournament via a $250 satellite. “I’ve been playing the MSPT since the beginning, but this is actually my first MSPT cash. It’s pretty cool.”

While it was his first cash on the tour, Kim is a familiar face at Canterbury Park. The majority of his previous $37,886 in lifetime earnings have come at the cardroom, including his former best cash of $4,423, which came from finishing ninth in the 2009 Twin Cities Poker Open.

The Minnesotan said he doesn’t have any immediate plans for the money, other than to help with his 19-year-old son’s college education.

Cowboys Leave Ladies in the Dust

Rubin called and then checked again when the 7♠ appeared on the turn. Kim kept the pressure on by moving all in for 770,000, and Rubin thought long and hard before making the call. Rubin was drawing dead, and Kim took over a chip lead he would never relinquish after the 2♠ was run out on the river.

“I wanted him to think I didn’t have it, tried to induce action,” Kim said of the big hand against Rubin. “It was a bit of reverse psychology. I was obviously running hot, and once I had half the chips in play I was very aggressive. Pedal to the metal.”

Day Two saw 78 players return to action, but 33 of them needed to leave empty-handed before the money was made at the top 45. Among those to miss out on a payday were Minnesota Poker Hall of Famer Mike Schneider, MSPT Pro Matt Kirby, and bubble boy Scotter Clark.

Kim’s win marked the end for Season 7 of the MSPT. The tour will now be on a short break before kicking off Season 8 from January 5-8 with a $350 buy-in, $100,000 guarantee Regional Event at Potawatomi Casino in Milwaukee, Wisconsin.

For a look at their full Season 8 schedule, visit msptpoker.com.

if he won the second biggest tournament of the us, it should have been discussed