As the birthplace of both the Mid-States Poker Tour (MSPT) and Heartland Poker Tour (HPT), and with its own Poker Hall of Fame, the “Land of 10,000 Lakes” is a special place for poker. That was further evidenced this past weekend when Jon Hanner topped a field of 182 entrants to win the $1,000 buy-in 2017 Minnesota State Poker Championship at Canterbury Park for $45,511. 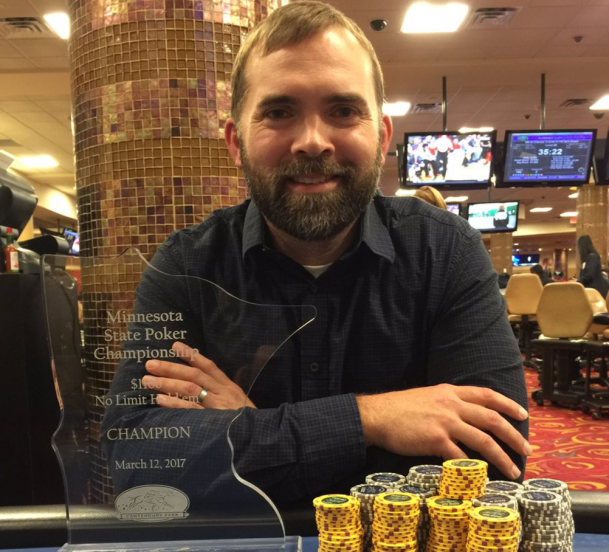 Hanner Finally Breaks Through in a Mid-Major

The Minnesota State Poker Championship, an annual event held since 2008, is one of the most prestigious events in the Midwest, and for Hanner it proved to be a breakthrough win.

“It feels amazing,” Hanner told CardsChat after the win. “I’ve been playing a lot of local $1,000 tourneys for about four years now and this is the first one I’ve won. So, it’s a bit of a relief as well. The one good thing about not getting results is that it forces you to constantly evaluate your game and figure out what leaks need to be fixed.”

The Minnesotan experienced big swings throughout the tournament, but he did say there was one hand that put him in position to win. It took place during five-handed play against chip leader Rob Wazwaz. Hanner raised from the cutoff holding the ace-deuce of clubs and Wazwaz three-bet from the button.

“I thought he would be putting max pressure on me thinking I wouldn’t want to play a big pot and bust before the two shorter stacks,” Hanner explained. “I thought I’d get a good number of folds from him if I shipped, so I did.”

Wazwaz snap-called with Big Slick, but fortunately for Hanner he flopped a deuce to score the double and claim the chip lead. He wouldn’t relinquish it on his way to winning the trophy.

Prior to the win, Hanner had $256,504 in live tournament earnings, including a career-best $102,503 for finishing third in the 2014 World Series of Poker Event #23: $1,000 No-Limit Hold’em Turbo for $102,503. His weekend victory marks the second-largest score and third victory of his career. Past wins included a WSOP Circuit ring at the 2012 Horseshoe Council Bluffs stop and taking down a Grand Poker Series event in 2015.

The final table was a who’s who of Minnesota poker royalty. In fact, most of the finalists had tasted prior success in Minnesota, primarily on the MSPT. For instance, ninth-place finisher Rich Alsup was fresh off winning the MSPT Season 7 Player of the Year, while sixth-place finisher Dan “DQ” Hendrickson, so nicknamed for the chain of Dairy Queens he owns, won the MSPT Season 6 Canterbury Park for $106,182.

There’s also MSPT Pro and two-time champ Blake Bohn, who currently sits second on Minnesota’s all-time money list with nearly $2.6 million in earnings. Finally, both Wazwaz and Vic Peppe, who finished in fifth and third respectively, are MSPT regulars each with runner-up finishes within the last six months. It’s worth noting that Wazwaz had finished runner-up in the same event one year before and actually won it for $39,090 back in 2011.

Outside the MSPT, seventh-place finisher Mark Fink has made a name for himself on the WSOP Circuit, earning four rings since 2013 and $221,004 in earnings.

“I’ll probably play the 100th MSPT Main Event at Meskwaki Casino next,” Hanner concluded. “I also expect to play a bunch of mid-stakes tourneys during the WSOP as well.”