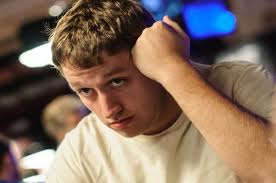 John Eames booked a big win at the WSOPC Planet Hollywood Main Event in his first attempt on the Circuit. (Image:pokernews.com)

John Eames became the star of the show at the recent WSOP Circuit Planet Hollywood Main Event in Las Vegas, taking home a gold and diamond ring for first place, and $289,706 in his first ever appearance on the WSOP Circuit. The veteran poker pro from England also won automatic entry into next year’s $10,000 WSOP National Championship.

Winning a large-field tourney involves some measure of luck, and John Eames welcomed his share of it in a hand at the final table that nearly sent him to the rail in 9th place. He had just lost half of his stack to Quang Ngo, and had only 220k left with a big blind of 50k. Upon checking his cards, he shoved all in pre and was called by Matt Berkey. Contender Michael Skomac elected to shove all in over the top, and Berkey called holding Ad5d.

Skomac was in the lead preflop with JhJc, while Eames started the hand dead last with only about a thirteen percent chance to win. As luck would have it however, he paired the flop and rivered a straight for the triple-up and a much needed boost. From there, he continued to spin it up on the way to heads up play, which began shortly after 11:30pm Monday.

The heads up battle ran for nearly two hours with Eames starting slightly ahead. He steadily chipped away at Berkey to gain an advantage, but Matt fought back to recapture the chip lead he had impressively maintained throughout most of the tourney. It wasn’t long before the two were all in for nearly seventy-five percent of the chips however, but this time Eames prevailed and would never look back.

Eames was an almost seventy percent favorite holding pocket queens, while Berkey held 9d6h for an open-ended straight draw. The 4d on the turn was close but no help for Matt, and the As on the river ended his spectacular run in second place for $179,119, handing John Eames his seventh recorded first place win, and $289,706 to push his career stats over the two million mark.

The next stop on the WSOP Circuit is Harrah’s Cherokee in North Carolina, for a tournament series that runs from November 27 through December 8.