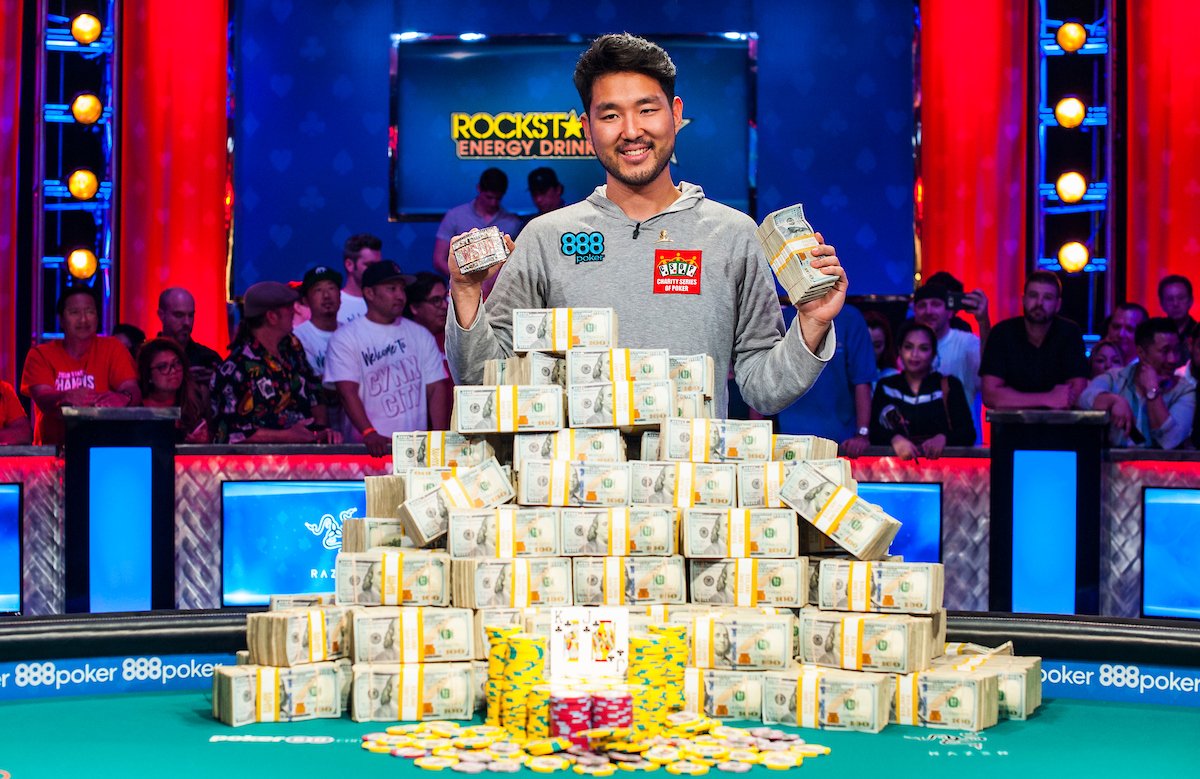 Cynn, 33 of Northbrook, Illinois, was the last player standing in the second biggest Main Event in history. He bested a field of 7,874 that included 2009 Main Event winner Joe Cada at the final table. In total over three days, the final table lasted 442 hands, the most ever for the Main Event in its 49-year history.

When Cynn, Miles, and Michael Dyer started three-handed play on Saturday, Cynn was second in chips, more than 110,000,000 between him and the chip leader Miles.

Though the matchup lasted into the wee hours, it was anything but a snooze-fest for fans. Cynn and Miles went back and forth for hours, with lots and bluffing and three-bets, and the lead changing 11 times between them.

And just before sunrise, the Rio All Suite Hotel & Casino became the capital of “Cynn City.”

Cynn, who had 2011 WSOP Player of the Year Ben Lamb and heads-up no-limit hold’em specialist Dan Cates in his corner, nearly reached the Main Event final table two years ago, finishing 11th in 2016 for $650,000.

Without his two WSOP Main Event cashes, Cynn has about $300,000 in tournament winnings over eight years of results.

“Last time when I got knocked out in 11th I was really happy,” he said after Sunday’s win boosted his lifetime tournament earnings to more than $9.7 million. “Really, neither is supposed to happen, right? To make 11th is insane on its own. And then to win, that’s literally something that you dream of, but just never expect to happen.”

After Dyer, donning his blue hoodie emblazoned with balloons and clouds, was eliminated about an hour into three-handed play, the bricks of cash were poured onto the table.

Early on in heads up action, Cynn, with his calm smile, shrugged off what appeared to be a turning-point bluff after Miles shoved on a board of J♦4♦3♥3♣K♦ with 7♥5♦, prompting Cynn to fold his 6♠4♣.

A call could have ended the match nearly a full working day earlier for Cynn, but he didn’t let it knock him off-balance upon learning of the bluff from his rail a half-hour later.

The final two players appeared to get along as they fought for the title, laughing and smiling with each other between hands.

“Tony is an amazing guy,” Cynn said. “I truly belive that from my conversations that we’ve had at the tables. He plays really well. I think he adjusts well. He put me in a lot of tough spots.”

Miles, 32, from Jacksonville, Florida, had only cashed two previous times at the WSOP for $6,396, and his previous best finish was an $18,000 cash for third place in Florida.

Fans in Miles’s corner wore black and white T-shirts with the words “One Day at a Time” on the front and “Team Miles” on the back. It was a nod to his sobriety, as Miles’s story was one of a recovering drug addict hitting rock bottom before finding focus and redemption through poker.

Most fans on either side of the heads up battle seemed to endure the entire match, and Cynn’s rail erupted when he called for the final hand and Miles was drawing dead.

Among other notable players on the rail were Shaun Deeb, Cliff “JohnnyBax” Josephy, and 2017 WSOP Main Event winner Scott Blumstein, who stood in a corner, watching the ESPN feed on his phone.

Blumstein seemed to enjoy the experience of being an ambassador with a view.

“It’s a lot more relaxing,” he said. “I’m excited to see what these guys do.”

Wow great accomplishment, you played amazing, and you deserve the title.