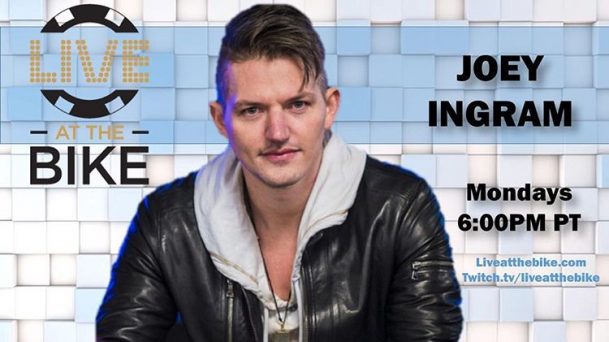 Joey Ingram is sacrificing PLO time to host a new, unnamed show every week on Mondays at 6 pm PT on the “Live at the Bike” Twitch channel. (Image: Live at the Bike)

Partnering with ‘Live at the Bike’

Ingram, a renowned pot-limit Omaha player from Chicago, rose to poker fame thanks to The Poker Life Podcast, which earlier this year beat out the likes of the PokerNews Podcast and TwoPlusTwo Pokercast to win “Podcast of the Year” at the American Poker Awards.

Ingram, who has an affinity for calling people “papi,” controlled the show from top to bottom, which afforded him a great deal of freedom when dealing with guests.

“I’ve been creating poker content for about 3.5 years now and I’ve rarely worked together with any poker related companies for a number of different reasons,” Ingram said on a post to social media.

“I’ve always liked myself being associated with myself only as it gives me the most freedom to do, say, [and] create what I want to create,” he said. “[But] I decided that I would gamble a bit in 2017 and be open to more collaborations if I felt like it was a good opportunity.”

According to Ingram, he was approached by Live at the Bike’s Ryan Feldman earlier this year about doing a weekly show. As for what the show’s about, Ingram shed a little light in an announcement video posted to social media:

“[We’ll be] talking about what’s going on in poker, some strategy, interacting live with the chat, taking questions, answering some questions, maybe doing some call ins as well, and from time to time, having on some guests.”

Ingram’s show is currently without a name, but the YouTube star has asked his fans and the greater poker community for help. Whoever comes up with the best name, as determined by Ingram, will win $99.27 plus a chance to come on the show.

Some possible titles submitted by fans include Outta Line with Joey, On the Mic at the Bike, and Playin’ Poker with Papi.

Ingram has been a busy man this year. In February, he became a published author after he won a $2,000 prop bet with Jonathan Bales in which he had to write a 40,000-word strategy eBook in 11 days.

Earlier this week, Poker Central revealed its newest show for PokerGo subscribers, a reality offering called “Major Wager.” Ingram hosts that program, too, which pits poker pros against each other in a series of prop bets. Ingram serves as sort of a hype man among the pros, which include Daniel Negreanu, Antonio Esfandiari, and Brian Rast.

He’s also currently involved in a prop bet of his own with Bill Perkins. Ingram, who doesn’t know how to swim, has put up $5,000 to win $15,000 that he’ll be able to swim a mile in open water by the end of the month down in St. Thomas.

(No word yet on whether or not Hurricane Irma, which hit the US Virgin Islands last night with deadly and destructive winds, will force them to alter any prop bet conditions.)

As for “Live at the Bike,” they made headlines earlier this year by cancelling an appearance by Salomon Ponte, aka “Hashtag King.” The move, largely applauded by the poker community, came on the heels of Ponte’s controversial appearance on Poker Night in America in which he used racist/sexist/homophobic slurs.

Shaun Deeb, the brunt of many of Ponte’s attacks, appeared on Ingram’s podcast and called for a “Live at the Bike” boycott if the Hashtag King appeared on the show. He was removed from the lineup a short time later.