Pot-limit Omaha specialist and YouTube personality Joey Ingram isn’t one to shy away from a strange prop bet. The host of PokerGO’s new prop bet show “Major Wager,” is so confident that he can learn to speak Mandarin fluently within a year that he’s putting his money, or $7,500 of it, on the line against a pair of entrepreneurs, with a chance to win $45,000. 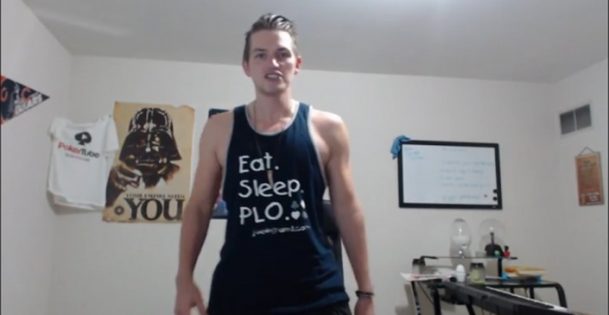 Joey Ingram bet he can learn to speak Mandarin fluently within one year. (Image: pokerstrategy.com)

Due to the hurricanes in the Caribbean this fall, the poker podcaster was unable to swim a mile in the ocean to win a prop bet against Bill Perkins. While that bet is on hold, he’s moving on to another challenge.

This one won’t be easy. According to Unabel.com, Mandarin, the world’s most spoken language, is the hardest language to learn for an English speaker.

“Thanks to it being a tonal language, every sound in Mandarin’s phonetic transcription system pinyin has four distinct pronunciations. Add that to the fact that Chinese is a language rich in homophones and full of idioms and aphorisms picked up over the course of its long history, and Mandarin becomes arguably the most difficult language in the world for an English speaker to learn,” an article on Unabel.com read.

Ingram has made many crazy wagers over the years but claims this one is his “most out-of-line prop bet to date.” Joey is putting up $7,500 against the $45,000 of Jonathan Bales and Peter Jennings, the co-founders of Fantasy Labs, a daily fantasy sports real-time analytics platform.

To prove he has learned Mandarin, Ingram must host a full 30-minute podcast on his YouTube channel in Mandarin. The bet must be completed within one year. How fluent must he become to win the bet?

How will he learn how to speak Chinese, arguably the most difficult language to master?

“I don’t know,” he said. “I’m going to watch Mandarin movies, listen to Mandarin music, I’m going to go to China and spend some time on the Mandarin grind. I don’t really know exactly what I’m going to do. I got a couple of really good apps I’m going to be using. I’ll be putting in many hours a day.”

Learning how to speak Chinese isn’t an easy task. It takes many years to master. Ingram announced his upcoming prop bet on Twitter, and many of his followers aren’t too confident in his ability to pull it off.

“My French Language Teacher told me it took him 7 years to be Fluent in Chinese and he lived there for at least 3 years. Good luck though,” @EBeckster

“Your French teacher sounds like a donk. I know a lot of teachers who are donks,” Joey responded.

“Some of the smartest people in the military study 1.5yrs / 6hrs daily and still struggle — any less than 2k hours = drawing dead,” @mercurius_59 commented.

Ingram said he’s willing to put in 2,000 hours if need be. That’s the equivalent of working 40 hours per week for a year (50 weeks, assuming two weeks off for vacation).

If you want to get some side action on Joey’s prop bet, BetOnline has odds available. As of Monday, Ingram’s odds are -1000 to fail and +600 to win the bet. Needless to say, there aren’t many optimistic he will come through.

This is true that to prove he has learned Mandarin, Ingram must host a full 30-minute podcast on his YouTube channel in Mandarin. I am big fan of her.