Joe McKeehen Wins $7.6M at World Series of Poker 2015 Main Event, As Predicted; Runs Like God and Then Some on Day Three

Joe McKeehen is the pride of Philadelphia tonight, after winning the $7,683,346 top prize and besting 6,418 starting players in the World Series of Poker (WSOP) Main Event for 2015. 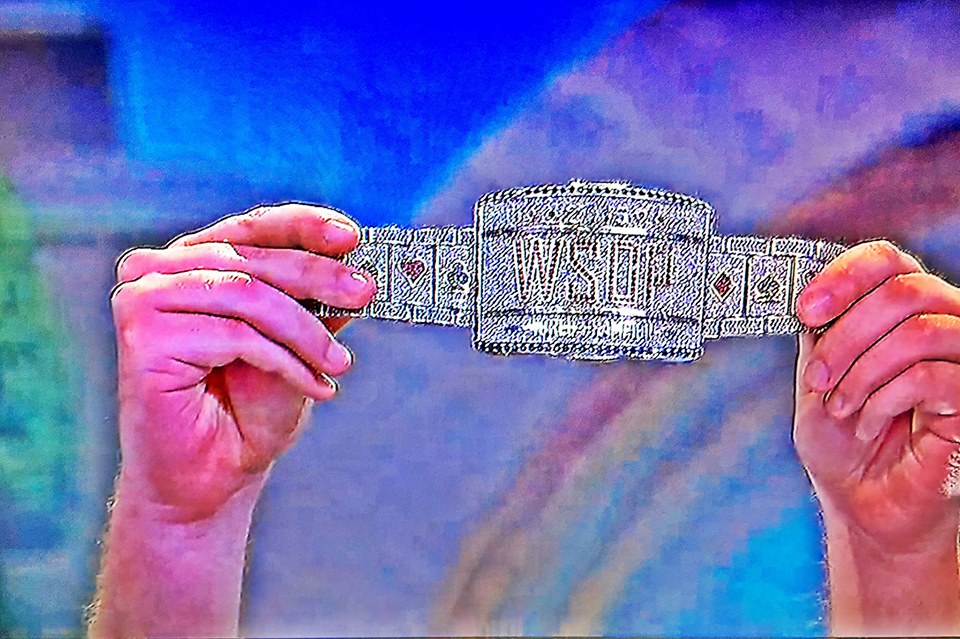 Combining incisive play with an almost bruising ability to be hit by the deck hand after hand after hand, McKeehen surprised no one by dominating his opponents throughout the three-day November Nine finale.

When the WSOP November Nine began play at the Rio in Las Vegas on Sunday evening, McKeehen held an overwhelming chip lead. His stack was nearly triple that of any other player’s.

He sat down at the table to begin Tuesday night, the final day of play, with better than a three-to-one chip advantage over second place opponent Neil Blumenfield.

McKeehen, prior to Tuesday, was running better than Jackie Joyner-Kersee at the 1988 Olympics. However, he was also playing great poker.

About 90 minutes into the finale, McKeehen picked up pocket queens against Blumenfield’s deuces. Sitting on a small stack, Blumenfield was forced to shove. The board ran out blanks for the 61-year old amateur from San Francisco and he was eliminated in 3rd place for $3,398.298.

That left just Josh Beckley and Joe McKeehen to fight for the gold bracelet and $7.6 million first place prize.

Deck Hit Him in the Face

Those hoping for a long, heated heads-up duel were sadly disappointed. McKeehen held nearly a six-to-one chip advantage, but that wouldn’t stop Beckley from pushing back.

Early on in heads-up play, Beckley attempted some three-bet bluffs to no avail. The deck simply hit McKeehen in the face all evening.

Beckley, down to just 18 big blinds in a short heads-up match, shoved all in with 4♦4♣. McKeehen made the call with A♥10♦. To the surprise of absolutely no one, McKeehen paired up his 10 on the flop. Beckley didn’t improve on the turn or river, and McKeehen ended the 2015 WSOP Main Event by winning a race. Beckley takes home $4,470,896 for his second-place finish.

It was almost ironic that Beckley and McKeehen ended up as the last two standing. On Day Six back in July, McKeehen found himself all in with his tournament life at stake, needing a four-outer to double-up against Beckley. Like Tuesday night, McKeehen won the pot by hitting a 10.

McKeehen earned his bracelet. He did far more than just catch cards. He played the big stack throughout the three days of play at the final table like a grizzled veteran, which in terms of tournament play, he pretty much is.

Constantly raising pre-flop with any two cards and putting pressure on his opponents, McKeehen seemed to consistently make the right moves at the right time.

He eliminated six November Niners, and made it seem easy. Never once did any player at any time during the past three days so much as put pressure on him.

His chip stack never dwindled to less than twice the size of the second-largest stack at the table. It was Joe McKeehen all day, every day, for three days.

The poker world has a new champion. His name is Joe McKeehen, a 24-year old pro from Pennsylvania. Bravo, Joe. Well-deserved, well-played, and well, lucky, too.

been watching up to day before so major spoiler for me 🙁
last one not on youtube yet , was hoping bloomfield did better .

Or you could just toss 2 bucks to ESPN and watch any part or all of it instantly.