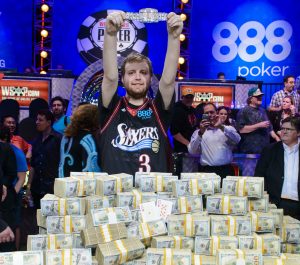 Joe McKeehen, the 888poker-sponsored 2015 WSOP Main Event winner, was kind enough to do a Q and A with us just before the holidays.

In this interview, Joe answers many questions you’ve probably wanted to ask him yourself. So we kick off 2016 with a look into the mind of poker’s latest wunderkind.

We found his responses to be surprisingly humble and direct, and less surprisingly, laconic.

This poker wiz kid apparently still has his feet on the ground, and intends to keep them firmly planted there, despite his new-found riches.

McKeehen pulls no punches when answering questions, despite being more of a stealth warrior on the felt.

CC: Did you have a specific strategy mapped out before the final table started? If so, what was it, and how much did you have to tweak it as players were eliminated?

JM: My strategy was to just play. Strategies change throughout the game because you figure out what other people are doing and try to take advantage. 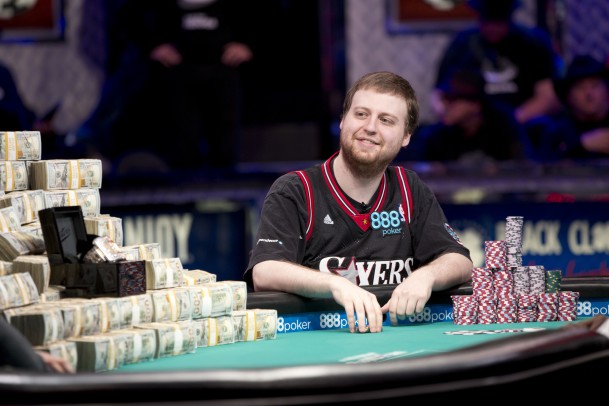 McKeehen seemed to know what to do, when to do it, and who to do it to, throughout the Series. Running like a Kenyan marathoner didn’t hurt either. (Image: Chris Capra/888poker)

CC: You were already an experienced tournament player before the Main Event. How much time was spent scouting your opponents by watching ESPN’s Main Event coverage (or anything else, for that matter), and just prepping in general, given your overall acumen in this medium from the get-go?

JM: I watched all of it. The coverage didn’t show me much of what I didn’t already know. I prepared by doing some simulations and watching some WCOOP final tables on Youtube just to see some spots that might pop up at the Final Table.

CC: What did you think of Justin Schwartz refusing to shake your hand when you busted him out in 14th place in the Main Event?

JM: I politely decline to respond to this question.

CC: Early on at the November Nine final table, you seemed to play passively, even with a huge chip lead. Was that more situational or by design?

JM: It felt like the right way to play, so that’s what I did.

CC: Entering the final table, which player did you expect to be your toughest competitor, or were you confident no one could outplay you?

JM: They were all good, strong players. I thought some specific players might have given me some trouble but fortunately it worked out for me in the end. 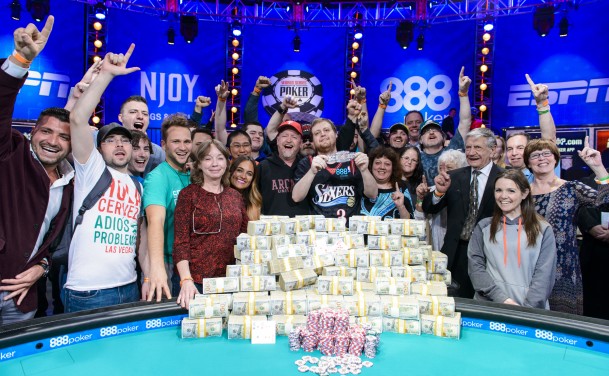 McKeehen is close to his family, and had plenty of supporters on hand to help him celebrate his July 2015 Main Event victory on ESPN. (Image: Chris Capra/888poker)

CC: Did any of the other November Niners surprise you with the way they played?

JM: Pretty much everybody played differently than the way I’d expect. They all played well. I just had better cards and more chips so I was going to be tough to beat no matter how they played.

CC: You clearly dominated the final table, but were there any specific hands you felt you could have played better?

JM: I think I missed a valuebet vs Tom [Cannuli] when I had KJ and he had 66. The true gangsters of the game valuebet there (and I don’t think it’s close the way the public thinks it is) but for some reason I turtled up and took a safe route.

CC: You seem to be really close with your parents. How do you think your lifestyle might change now, and are you planning any lavish “thank you” gifts for them for their ongoing support of your poker career?

JM: My lifestyle won’t change at all. I just have more money to continue to do what I am doing. My parents will have a decent Christmas. [Joe answered this before the holidays].

Joe McKeehen didn’t need any strategy. The deck ran over him !

That article was every bit as exciting as Joe’s play.