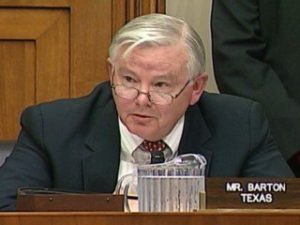 US Rep. Joe Barton (R-Texas) wants to see online poker regulated on the federal level, rather than banned, but he may be in for a struggle. (Image: abcnews.go.com)

US Representative Joe Barton (R-Texas) plans to introduce a bill that would regulate online poker at the federal level, a move that would put him in stark opposition to some Republican colleagues who support a total ban on Internet poker and casino games.

Barton has previously pushed pro-poker legislation in recent years, and says that he will introduce another online poker bill to Congress in the next month or so.

Right now, all of the talk on Capitol Hill when it comes to online poker is about the Restoration of America’s Wire Act (RAWA), a bill supported by casino magnate Sheldon Adelson. RAWA would ban online poker, online casino games, and even online lottery sales across the United States, fulfilling Adelson’s promise to do whatever it takes to stop online gambling in America.

Bill in Contrast with RAWA

Barton’s proposed bill would not blend well with RAWA. Rather than banning online poker, it would instead set up a federal-level regulatory framework that would allow for online poker to be offered in any state.

However, states would have the right to decide either way, meaning that individual states that have strong anti-gambling stances (including Chaffetz’s Utah) could stay out of the Internet poker business. The bill would also reportedly include a number of safeguards and protections for consumers to make the games safer for players than the overseas games that are currently the only option for most Americans.

“[Any American] can log on to a site based overseas, deposit money, and they can start playing poker,” said Poker Players Alliance Executive Director John Pappas about the current state of Internet poker in the United States. “They just can’t do so on a site that’s licensed and regulated by [any given] state.”

RAWA supporters have questioned whether online poker can ever truly be regulated, or whether it would be possible to ensure that the games could be contained in certain states without technically savvy individuals (including children and teens) getting around those restrictions.

But Barton says there’s no doubt it can be done, because it’s already the reality in many places.

“It’s being done in some states,” Barton said. “It’s being done overseas. This is not a cross-your-fingers-hope-it-works kind of deal. Once it was up and running, people would say, ‘What was all the hullabaloo about?’”

Barton Bill Would Be Poker-Only

Barton also made the point that his bill would only apply to online poker, and wouldn’t regulate online casino games, lotteries, or “any other games of chance.”

Exactly what online gambling should be legal is a sticking point for almost everyone who wades into the topic: even in RAWA, there are carveouts for horse racing and fantasy sports games, and some want to ensure state-run lotteries are protected as well.

As with his previous bills, any attempt by Barton to regulate online poker this year will face stiff opposition and be unlikely to progress very far. While there may not be enough interest in Congress to pass RAWA or another ban on Internet gaming, it’s unlikely that there’s enough support to pass a bill in support of online poker, either.

For many legislators, the issue just isn’t important enough for them to spend much time on. But Barton is hoping that efforts in states like California and Pennsylvania might raise the issue profile enough to get the attention of some fellow law makers.

This puts advocates who have been beating the ‘states’ rights’ drum against RAWA in a tough position. To come out now in support a federal regulations that would dictate to states how to regulate the game smacks of hypocrisy.

Any federal bill should be limited to removing barriers to regulation, and leave the regulating to the states, as we have been saying all along.