At Event #57 of the 2018 WSOP, the $1,000 Ladies No-Limit Hold’em Championship, taking control and never letting it go was the name of the game, both on the felt and behind the scenes. The same could be said for eventual winner Jessica Dawley. 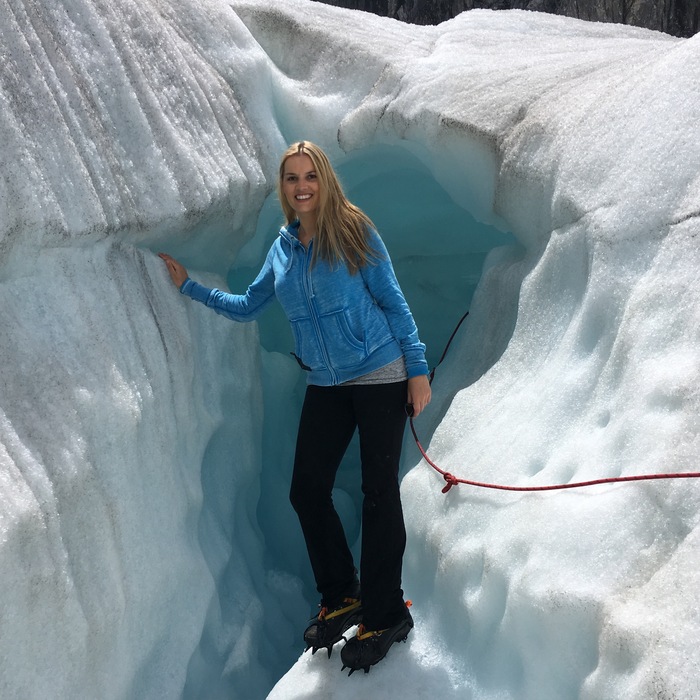 Event #57 winner Jessica Dawley is no stranger to conquering challenges, having served in the Air Force and taken on daunting feats like this icy climb. (Image: Jessica Dawley/CardsChat)

The World Series of Poker and Poker Central avoided a PR nightmare on Sunday after deciding to move the Ladies event final table to the main stage and Twitch livestream it. The change of heart occurred thanks to eventual 10th place Ladies event finisher Danielle Anderson, whose social media protest of the situation pushed suits to put the Ladies on Twitch over the $10K Razz finale. 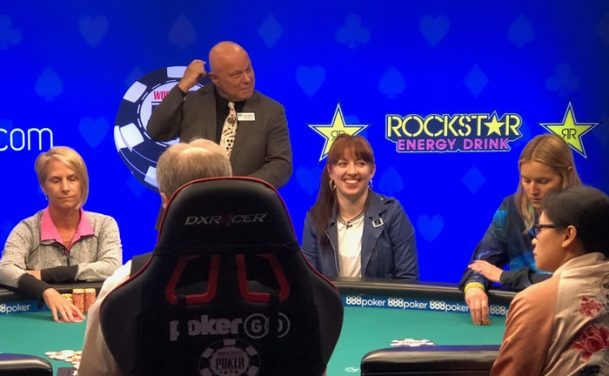 Long-time CardsChat forum poster Jacki Burkhart, aka “missjacki,” did us proud with a 5th place finish for $28,167 and a lively rail, but couldn’t catch the cards needed to win her first bracelet. Instead, Air Force veteran Jessica Dawley walked away with the $130,230 top spot cash, bringing her lifetime live tourney wins to just over $713K.

Dawley is a fearless world traveler, and combined with her military training and experience, showed all the large-and-in-charge command needed to beat 696 tenacious women in the event. She triumphed over numerous recognized pros, including Gaelle Baumann (31st/$2991), Natasha Mercier (34th/$2991) and model player Lacey Jones (41st/$2551).

Play was running late Saturday in Event #56, the $10,000 Razz Championship, with 2010 WSOP Player of the Year Frank Kassela and Calvin Anderson scheduled to return to the Brasilia room main stage at 2 pm on Sunday to battle for the bracelet live on Poker Central’s Twitch channel.

After the conclusion of the Razz tournament — in which Anderson ended up winning his second WSOP bracelet for $309,220 — Poker Central planned to then begin its ladies event coverage in progress, despite the final table starting at noon.

Many poker-playing women on Twitter felt slighted by Poker Central and, led by a post from Danielle Anderson, pushed the poker media company to bump the Razz finale in favor of the women’s event.

Yo, @wsop I love you but there is one ladies event the whole summer. Draws a huge rail. You know this but you’re sticking us in the back corner of Brasilia & aren’t even doing live stream until Razz is done? And Razz doesn’t even START until 2pm? Wtf?

Convincing more women to play poker — a task organizations such as the Poker League of Nations are attempting to accomplish — is quite a challenge, more reason for the ladies who do play to be upset that a male-dominated event was originally given preferential treatment before Poker Central pulled a reversal two hours into Sunday’s Day Three session.

I think actually just more events like this [ the ladies event] would build up more fanfare, more hype,” Jacki Burkhart told CardsChat when asked how the poker community can attract more women to the game. “They’re doing good though. I think things are moving in the right direction.

“I think that was a misstep because it was advertised that we would be livestreamed, but then they told us we weren’t, so it’s good they made the right decision,” Burkhart said in regards to the initial Poker Central snub.

Burkhart, who’s been a CardsChat forum poster since 2013, she told CardsChat she feared Dawley the most at the final table, and for good reason.

“It’s tough having Jess on my left with a million chips,” she said on the first break at the final table. “She’s probably the best player at the table.”

Dawley also has the most experience playing poker on television or livestream, having competed multiple times on Poker Night in America. That experience paid off on Sunday as she patiently waited for spots to take advantage of her opponents.

A large crowd of friends, including CardsChat forum poster Chris Baud, proudly cheered Burkhart after each pot she won. But in the end, her confidence was no match for the cards that eventual runner-up Jill Pike caught.

Burkhart busted in 5th place after running into Pike’s pocket aces with an inferior A-J. The Boring, Oregon resident (yes, that’s a real city: population 7,762) hugged her rail and headed to the payout line at the Rio.

The entire Ladies event final table showed that American women are a tough crew to tackle: all nine spots belonged to US players.

Congratulations to Jessica Dawley. It’s good to encourage more women to enter the awesome world of poker.Congrats also to Jacki Burkhart for 5th place finish. I hope more women events to be streamed live through Twitch in the future.

Congratulations to jessica for staying with the event # 57, good achievement the united states has good poker players and they have shown it, but I have a doubt I do not know what I like more than it has won or the image where jessica is climbing jejeje .. luck and follow the successes