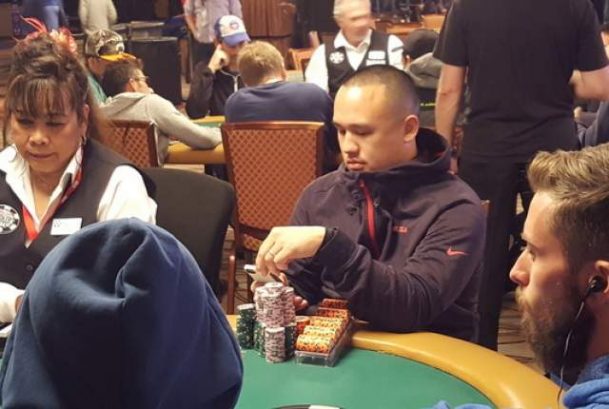 The event took place at Seminole Hard Rock Casino in Hollywood, Florida. There was a $500,000 guaranteed prize pool, but far more players than expected signed up. In fact, it became the second largest field in state history. The prize pool exceeded $1.4 million.

When play got down to four-handed, the players agreed on a chop. Wong held nearly 70-percent of the chips in play so he received the largest cut. Nancy Thomas was credited with 2nd place for $109,113. Victor Figueroa took 3rd for $103,826.

Since his November final table appearance, Wong hadn’t scored a big win in a tournament until Wednesday in Florida. He only has two other small cashes since he won $1.1 million in the Main Event.

Since the November Nine…

Wong isn’t the only 2016 November Niner doing big things since the final table concluded. Cliff “JohnnyBax” Josephy, the 3rd place finisher, has two big scores in the past two months.

Earlier this month, JohnnyBax finished runner-up in the PokerStars Championship Main Event in the Bahamas, he won $403,445. A month earlier at the WPT Five Diamond World Classic in Las Vegas, Josephy won a $5,000 buy-in tournament for $163,250.

The reigning world champion, Qui Nguyen, has yet to cash in any other tournament since taking down the WSOP Main Event. That shouldn’t come as much of a surprise. The $8,005,310 he won that day brings him to $8,058,296 in his career.

Runner-up Gordon Vayo has been silent since the November Nine, but he did take down the Main Event at The Rivers Poker Series for $587,120 a month before the final table began.

Other than a few small cashes from Kenny Hallaert, no other member of the final table has cashed in a live tournament since November.

Unlike many who have achieved the Main Event final table, Wong isn’t a one-trick pony. The New York native now has nearly $2.8 million in lifetime live tournament winnings.