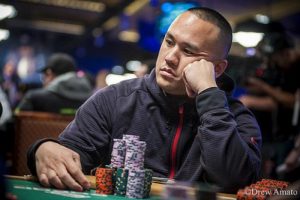 Jerry Wong is a member of the 2016 WSOP November Nine. (Image: wsop.com)

Jerry Wong achieved the WSOP November Nine final table which begins October 31st at the Rio in Las Vegas. The 10,175,000 chips he’ll have when play resumes are fewer than everyone at the table other than Fernando Pons.

In comparison, chip leader Cliff “JohnnyBax” Josephy has 74,600,000. He’s going to need a few double-ups to give Josephy and others at the table a sweat. Going from a tiny stack to champion has been done in the Main Event before. Just ask Joe Cada, 2009’s winner.

Wong and Josephy don’t have chip stack size in common but they are both Brooklyn, New York residents. The 34-year old Wong is a poker pro with a successful tournament resume beyond the 2016 Main Event.

He had already won more than $1.3 million in live tournaments before this event. At the 2016 World Series of Poker, Jerry cashed seven times. But his true poker prowess is as an internet pro.

Wong has been grinding the online tables since 2008 and has won over $3 million on the virtual felt.  Needless to say, his presence at the final table is no fluke.

Although Wong is certainly glad to be a part of the November Nine, he may be a little disappointed in his current position. After Day Five, the New Yorker held the chip lead with just over 11 million. He managed to scoot by the following two days on about the same chip stack as he will have when play resumes.

Like many poker pros in this position, Wong is hedging his free roll. He is guaranteed $1 million but can win up to $8 million should he win the tournament.

Getting Plenty of Preparation

Wong isn’t using his Main Event break to sit around and relax. He’s been traveling the poker circuit in preparation for the most important final table of his life.

A few weeks after the summer WSOP session concluded, he finished 26th in the WPT Championship Event at Choctaw Casino in Durant, Oklahoma for $21,228. He followed that up with a 9th place finish in a Seminole Hard Rock Open $2,650 buy-in event in Hollywood, Florida.

The November Niner is also competing in the $5,000 buy-in WPT bestbet Bounty Scramble in Jacksonville, Florida. Wong is one of the bounties in the tournament, which means if another player busts him, they receive $2,500.