The second stop of the 2017/2018 World Series of Poker Circuit season finished up this past weekend at Foxwoods Casino in Connecticut, with rising pro Jeremy Meachem continuing his successful trajectory for the year. Meacham prevailed over a field of 486 entries in the $1,675 main event, winning a career-high $156,736. 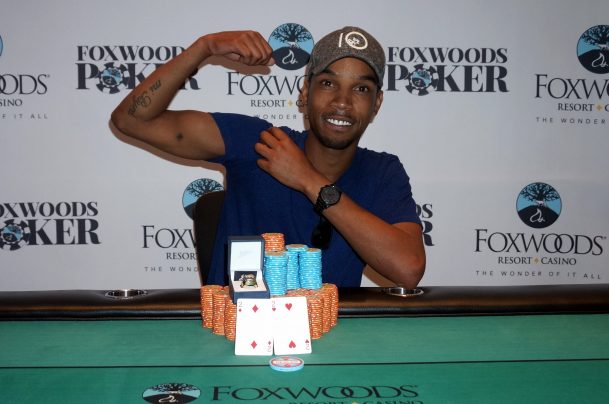 Jeremy Meacham poses for another winner’s photo after notching his second six-figure score of 2017. (Image: WSOP)

It marked the third consecutive WSOP Circuit Foxwoods Main Event final table for Meacham, a 30-year-old poker pro from nearby Oak Bluffs, Massachusetts. In 2015, he finished in sixth place for $28,556, and the year after that placed third for $66,930.

“The third time’s the charm, I guess,” Meacham told WSOP officials after the win. “It feels good to finally get there. Sixth, third, and first is a nice little progression.”

In addition to the prize money, Meacham became the third player to earn a free entry into the 2017/2018 WSOP Global Casino Championship.

Meacham rose to poker prominence earlier this year alongside his brother, Henry Meacham, after each won major titles in Florida just one week apart. Henry took down Event #1, $360 DeepStack, at the Seminole Hard Rock Poker Showdown for $122,467 six days after Jeremy won the WPTDeepStacks Jacksonville for $117,551.

Meacham finished Day 1A as the chip leader, and he would’ve taken the overall chip lead into Day 2 had it not been for 2011 PCA champ Galen Hall, who finished as the Day 1B chip leader after eliminating his brother Henry.

Meanwhile, Caleb Clarke finished as the Foxwoods Casino Champion, which gives him a seat into the 2017/2018 WSOP Global Casino Championship. Clarke amassed 122.5 points at the stop, which included winning Event #11: $3,250 High Roller for $50,625 and a gold ring. He also notched five other cashes, four of which were final table appearances.

The 2017/2018 season of the WSOP Circuit continues September 7-18 at the IP Casino Resort & Spa in Biloxi, Mississippi.