Only seven players had won multiple Mid-States Poker Tour (MSPT) titles, but this past weekend, 42-year-old Jeremy Dresch became the eighth by winning the MSPT Running Aces Main Event for $83,045. 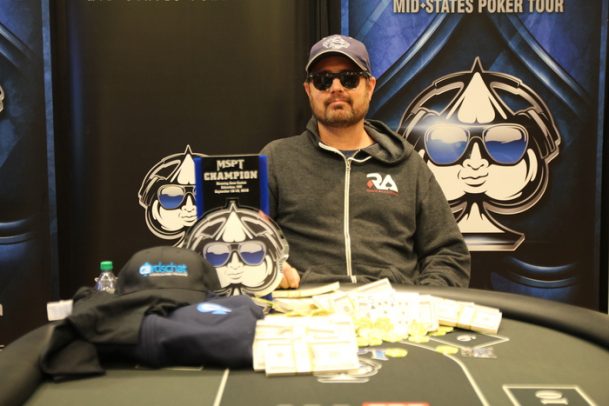 Cool cat: Jeremy Dresch took it all in stride when he won the MSPT Running Aces Main Event for 2016. (Image: MSPT)

Back in Season One of the MSPT, which was then known as the Minnesota State Poker Tour, Dresch won the tour’s second stop, and the first-ever at Grand Casino Mille Lacs. In the years that followed, Dresch racked up 10 MSPT cashes for $172,258 and seven final table appearances. With his win, he also tied another record for most final tables in tour history, as both he and Everett Carlton have made it eight times.

It was also a story of redemption, since Dresch finished sixth in the same event five months earlier. The $83,045 win, the largest of Dresch’s career, brought his live tournament earnings up to $659,057 and saw him leapfrog four players into 22nd place on Minnesota’s all-time money list. He’s also a three-time Heartland Poker Tour champ and the first player to win back-to-back events on that tour.

“Long time coming,” Dresch said of the win. “I never look beyond the weekend; I’ll decide what to play on Wednesdays. I didn’t even know this tournament was going on, I had no idea. My buddy told me earlier in the week, so I played it.”

The final table began with Dresch holding the chip lead, but that didn’t last long, as a bunch of players, especially Vic Peppe, gave him trouble.

Andy Beberg, who had finished eighth in the same event back in April, was eliminated in ninth place, while Kraig Komrosky, a month removed from topping a field of 458 entrants to win the MSPT Regional Grand Casino Mille Lacs, exited in eighth.

Dresch’s most notable hand came during five-handed play, when his Big Slick cracked the pocket kings of Bradley Demotts after an ace spiked on the flop. Heads-up play began with Peppe holding a slight lead over Dresch, but the latter used his vast experience to slowly chip away at Peppe.

After an hour, he held a significant chip lead and closed it out after getting it in with pocket fives and holding against Peppe’s jack-six suited.

The MSPT continues October 8-16 at FireKeepers Casino with a series of satellites and an $1,100 buy-in, $300,000 guaranteed Michigan State Poker Championship Main Event.