Jennifer Tilly might be an actress and poker player in a male-dominated world, but she wouldn’t have it any other way, according to a recent interview. For more than a decade, Tilly has been one of the leading personalities in the poker world, while still being an actress at heart. 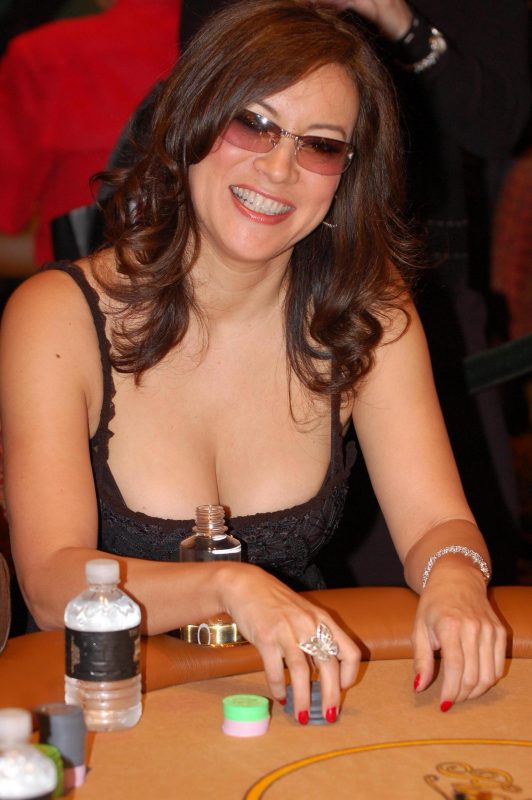 Now almost 60, actress Jennifer Tilly (seen here a few years back) is happy to embrace her role as an “aging starlet” in the poker world. Tilly was in Florida recently for the Seminole Hard Rock Poker Open. (Image: Timothy Jackson / WENN)

The almost 58-year-old actress, who claims to have appeared in 79 movies (according to her recent New Times interview), scored her first live cash back in 2005, when she won the Ladies Event at the WSOP.

Banking $158,335 for that win, Tilly was able to move away from acting and hone her poker skills with her partner and equally entertaining professional player and personality, Phil Laak.

Unlike other Hollywood stars who’ve taken up the game, Tilly has not only become a regular fixture at the biggest tournaments in the world, but she’s made her presence, and at times her, um, attributes, known.

While the likes of Ben Affleck, Toby Maguire, and Ray Romano often try to scruff it up as much as possible to avoid any kind of “pretty boy” labels, Tilly has embraced her role as the older sex kitten of the felt.

Not afraid to wear a low-cut top or two during the course of an event, the woman with the Betty Boop voice has gone on to win just shy of $1 million in lifetime earnings, but she’s not planning on stopping any time soon.

Talking to Broward County’s New Times with author Nick Sortal ahead of the Seminole Hard Rock Poker Open’s (SHRPO) $5,200 Main Event in Hollywood, Florida late last week, Tilly admitted that she now considers herself more of a poker player than an actress.

“I’m in the enviable position where I don’t have to work if I don’t want to. I used to be in a lot of movies that weren’t any good just so I could pay the plumbing bill,” Tilly told Sortal.

A Love of Poker

While Tilly explained that it’s tough to win a tournament in today’s poker climate, she said the game is a way for her to do something she loves and be on TV at the same time.

Because she’s aware that every advantage counts at the table, Tilly counts “looking nice” as part of her overall strategy. While some women try to move away from exploiting their “assets” in order to get one up on their male opponents, Tilly has rarely had such reservations.

In fact, it’s been her willingness to embrace the “glam” poker player persona that’s not only earned her a string of tournament cashes, but a place in the poker industry’s spotlight.

Nice pair of attributes may help distract her opponents!