At the 10th running of the Jennifer Harman Celebrity Poker Tournament on November 11 at Planet Hollywood in Las Vegas, you couldn’t turn around without seeing a legend of the game sipping a cocktail and shuffling chips. Besides the event’s effervescent hostess and sponsor in Harman, bigger-than-life poker attendees included Daniel Negreanu, Kathy Liebert, recent World Series of Poker Main Event winner Qui Nguyen, and that “other” Nguyen: Scotty. 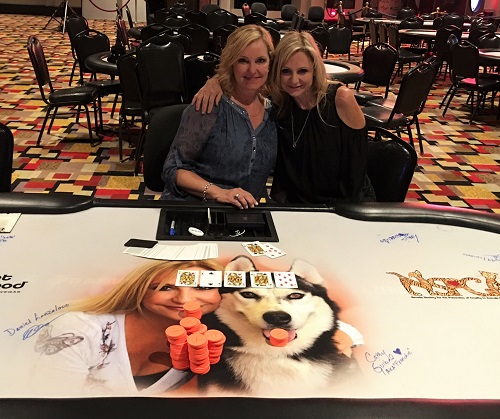 Nevada SPCA Wins for the Animals

The annual event, with all proceeds going towards the life-saving and adoption efforts of Nevada SPCA, the city’s only large-scale No Kill shelter, saw 224 players, from top pros to celebrities to amateurs, compete for a $10,000 first place finish.

That honor went to Cathy “Frenchie” Guibal, who, according to her Hendon Mob profile, has only had two prior live event cashes, for a total of $1,486. Second place went to well-known local pro Annie LePage, who took home $3,000 for her finish.

Primarily a cash game player, who told CardsChat she now plays a bit less often with a young baby at home, LePage’s previous best live tournament cash was in the 2015 WSOP Colossus event, where she took 1,202nd place for a $2,517 cash.

Plenty of celebrities were on hand, including magician Lance Burton, who is a steadfast Nevada SPCA volunteer and supporter, as well as ESPN WSOP commentator Norm Chad, popular Pawn Stars character Chumlee, and Bobby Black of the Las Vegas Tenors.

Some 500 people in total attended the chichi event, which featured glamorous silent auction prizes, including a private plane ride round trip to California, which went for $6,000.

CardsChat Is There as Sponsor

CardsChat was a Media Sponsor for the event, which included supplying some of the swank swag that went to all 10 final table finishers. CardsChat Forum and Social Admin Debi O’Neill was among the attendees, and noted how friendly and approachable all the stars were, many of whom were being mobbed for selfie ops.

“It was great seeing how affable all the poker pros were, including WSOP Main Event Winner Qui Nguyen and Daniel Negreanu,” said O’Neill. “They were happy to pose for pix, sign T-shirts, and Daniel made an amazing event MC, including showing off some substantial standup comedy skills to the crowd.”

Negreanu walked through the room, mic in hand, shouting out crazy hand combinations that would win $100, which he not-too-subtly suggested the winner donate to the charity of the night. And all of them did.

Nevada SPCA’s tireless Executive Director Doug Duke was thrilled with the fundraising effort, which he says is a mainstay of the No Kill shelter’s annual charity events now.

“Jennifer Harman is a hero for animals without equal,” said Duke.  “She unites the world’s best poker pros with amateurs, animal lovers, Vegas celebrities, and sports stars to support vital, lifesaving rescue work for fragile dogs, cats, rabbits, pocket pets, birds, and other animals escaping peril. It is because of her, and so many of these amazing poker pros, that we are able to find even more homes for animals who would otherwise have been abandoned.”