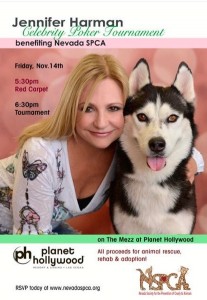 The Jennifer Harman Celebrity Poker Tournament will hit Planet Hollywood in Las Vegas on November 14, with the proceeds benefiting the Nevada Society for the Prevention of Cruelty to Animals (NSPCA).

The tournament will take place on The Mezz  at Planet Hollywood and has a $200 buy-in, with all animal lovers welcome. The Nevada SPCA is a non-profit organization that operates a no-kill animal shelter, and seeks to find homes for pets where they will be treated as part of the families that adopt them. Jennifer Harman is a long-time supporter of the NSPCA.

The event will start at 5:30 PM PST on November 14, and is expected to conclude at approximately 10 PM PST that same night. Players who wish to participate can RSVP via GiveSmart webpage. By registering now, players will have their seat saved in the Jennifer Harmon Celebrity Poker Tournament. Donations for the event can also be placed through a GiveSmart smartphone app or on the official website.

The tournament buy-in is $200 and all players are welcome. All proceeds from the tournament will go towards animal rescue, rehab, and adoption efforts. The event winner will receive a seat to the 2015 World Series of Poker Main Event, or receive $10,000 cash (their choice). All of the ten members of the final table will also receive “generous prize packages,” according to the tournament organizers.

Nevada SPCA Executive Director Doug Duke says that support from the poker community has been a very positive experience.

Duke exclusively told CardsChat, which is a sponsor of the event: “Our experience is that the poker community is especially generous and eager to make a huge impact for animals in need.  Besides participating in Jennifer’s tournaments, poker players volunteer, foster newborns, support Nevada SPCA on Amazon Smile and other online giving sites, and share the social media posts of rescued animals to help them find loving, forever homes.”

When speaking about working with Jennifer Harman, Duke praised the popular poker pro, saying “Jennifer Harman is an extraordinarily compassionate person and hero for animals.  She is uniting people from the poker world, and the business, sports, and entertainment industries, with all other animal lovers, to provide enormous support for no-kill rescue work for animals in desperate need.”

The list of confirmed celebrity attendees is quite impressive, so for those who decide to play and donate to a very worthy cause, you’ll be able to rub elbows with some famous poker players as well.

Some of the well-known pros participating include event organizer Jennifer Harman, as well as Andy Bloch, Chip and Karina Jett, Andy Hughes, and Jeff Madsen.

Many Las Vegas local celebrities who appear in some of the biggest shows on The Strip will also be attending. These include well-known performing artists such as master magician Lance Burton, Travis Cloer  and Graham Fenton of the popular and long-running musical Jersey Boys, Anthony Cools AKA “The Uncensored Hypnotist,” and Mark Shunock from the musical hit Rock of Ages. Even poker icon Doyle Brunson’s presence is anticipated, as well as paranormal TV host Zak Bagans.

Benefiting a Great Cause

The NSPCA mission statement makes clear the organization’s goal.”We work to achieve our adoption goals by treating each animal as an individual, with a name instead of a number. We strive to match each rescued animal with people by personality and lifestyle in order to have the best chance to find a forever home.”

On any given day, Nevada SPCA No-Kill shelter is home to more than a thousand rescued animals. There are hundreds of cats and dogs, but it doesn’t stop there; other domesticated animals also reside at the shelter, including rabbits, guinea pigs, gerbils, hamsters, ferrets, pot belly pigs, goats, turtles, fish, and many birds.

Besides animals awaiting adoption, there are those that are in need of rehabilitation. At the time of rescue, many animals have broken bones and other injuries, including disease, starvation, tumors, and more. The cost of rehabilitation and care takes money, which is why the charity tournament is such a worthy cause.

More About the NSPCA

The Nevada Society for the Prevention of Cruelty to Animals is a non-profit organization. A no-kill shelter, the organization promotes humane education, and also make referrals for low-cost spay and neuter services. NSPCA also challenge people to be the best possible guardians for the companion animals within their care.

I just saw the lovely dog in the picture , LOL