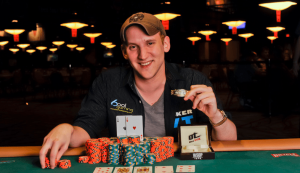 Jason Somerville’s “Run It Up” series has become popular among poker players and other viewers on Twitch. (Image: FlopTurnRiver.com/WSOP)

Jason Somerville was one of the more prominent sponsored poker pros working with Ultimate Poker. By the time the now defunct-site cut ties with Somerville, he had built up something of a following with his web series Run It Up, in which he tried to turn $50 into $10,000 on Ultimate.

That could have ended when Ultimate Gaming folded, but Somerville had other ideas. He began streaming on Twitch.tv, a site devoted to allowing players of all kinds of games to stream their activities to viewers around the world. And while it’s not surprising that some of Somerville’s fans followed him over to watch the new, live version of Run It Up, it’s unlikely that anyone could have predicted just how large his audiences would become.

Somerville’s broadcasts have quickly become very popular on Twitch. He currently has more than 38,000 followers, a number that’s still very small in comparison to the top streams for games like League of Legends, which have follower numbers in the hundreds of thousands. But his broadcasts sometimes attract in excess of 10,000 viewers at any given time, often ranking him among the top streams on the site and landing him as one of Twitch’s featured broadcasts.

That makes Somerville the most popular poker player on Twitch by a very wide margin. That success has come from a variety of factors, though Somerville says he believes he’s learned a lot in recent months that has helped to improve his streams.

“I’ve learned many lessons in the last 18 months in both business and production – there is no chance I would’ve been capable of hosting shows at their current production level and quality even six months ago, just as I hope in six months I’ll look back on these shows as comparatively un-evolved,” Somerville told PokerNews. “It’s been a very fulfilling journey so far, and my plan now is to finish up 2014 with our best live streams to date while continuing to lay the foundation for Run It Up’s projects in 2015.”

One of the major attractions of Somerville’s streams seems to be his willingness to interact with his fans and viewers. Even while playing real money online poker, Somerville makes sure to read and react to the ongoing chat in the stream. His exuberant personality comes through in these interactions, and he’s never short for words, often talking almost non-stop through several hours of streaming without any breaks.

A variety of content has also helped build his audience. In most streams, Somerville plays online poker (on a four-minute delay, to prevent opponents from seeing his cards), but the specifics change from night to night. Some streams are devoted to tournaments or cash games, while Tutorial Tuesdays feature basic information for viewers who are just beginning as poker players. Somerville also occasionally reviews hand histories from subscribers to his channel, analyzing a tournament or cash game session and offering suggestions hand by hand.

For Somerville, the streams are the best way for him to stay connected and contribute to the broader poker community.

“I stay involved in the game by streaming four or five times a week, creating enjoyable, diverse content, and working hard,” Somerville said. “I don’t believe you have to frequently attend live tournaments or wade into heated debates in forum arenas in order to make a positive impact on the game.”

The new poker boom is looming thanks to, in large part, this man right here! He’s the present “MoneyMaker” of this era in terms of attracting a huge audience of new players to learn and play the game. Kudos to my poker hero JCarver!