Jason Somerville to Host Run it UP! Reno Poker Series, Ahead of WSOP

Fans and followers of Jason Somerville will be happy to know an opportunity to meet the popular player and Twitch star is coming their way in late May. 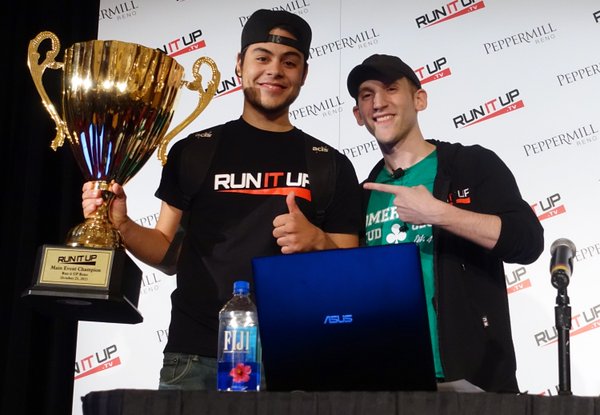 2015 Run it UP! Reno champion Nick Aguilera holds up the trophy, as Jason Somerville gives him some props. Somerville will host the same event again in Reno from May 24-30, right before the kickoff for WSOP. (Image: Twitter)

For those who might be travelling to Nevada for this year’s World Series of Poker (WSOP) scheduled to kick off on May 31, this opportunity will coincide perfectly, a reality that Somerville and his event backers no doubt took into consideration when planning these dates.

The star of his own Twitch streaming channel, Somerville will host the Run it UP! Reno poker series May 24-30 at the northern Nevada-based Peppermill casino. This will be the second event of its kind. The inaugural Run it UP! Reno took place last October and was a rousing success.

The six-day poker affair is highlighted by a $565 buy-in main event, with a $150,000 guaranteed prize pool. There will be additional tournaments with lower entrance fees, along with a Jason Somerville poker seminar.

Poker players attending Run it UP! Reno are eligible to receive discounted hotel room rates at the Peppermill. For the uninitiated, Reno, Nevada is approximately 460 miles north of Las Vegas, so be sure to allow wiggle room for driving or flying time if you want to make Day One of the WSOP right afterwards.

The “Biggest Little City in the World” is one of the top poker hotspots west of the Rocky Mountains. Poker players in northern California, Oregon, and Utah often travel to Reno for tournaments such as this one.

Somerville made headlines last week when his Run it UP! Twitch streaming channel surpassed 10 million views. That’s a Twitch poker record and will be difficult to top any time in the future.

The WSOP bracelet winner and Team PokerStars Pro is one of the hottest names in the game right now, so Peppermill’s poker room should benefit financially.

On top of representing a major poker site and streaming daily on Twitch, the poker pro is busy traveling the globe to play and promote the game. Over the past week, the New York native has been grinding the poker tables on the newly launched PokerStars New Jersey on Twitch for his many followers to see.

The Team PokerStars Pro spent a significant amount of time last year promoting online poker in California, along with fellow colleagues Chris Moneymaker and Daniel Negreanu. He also streamed live from major online and offline poker tournaments over the past year, including the Aussie Millions and PokerStars World Championships of Online Poker (WCOOP).

Needless to say, “jcarver” popularity will put the Peppermill Casino in the limelight during his event, stamping one of the hottest names in the game today on one of its biggest poker events of the year.

More Than a Live Streamer

Somerville has a genuine and very solid track record to back up his Twitch streaming advice. In fact, he’s one of the most successful players in poker right now.

Along with his WSOP bracelet in 2011, jcarver has $3,524,870 in career live tournament winnings to go along with a large sum of money he’s won playing online. And, who knows, maybe come May 30 he will have a Run it UP! Reno title to his belt. Chances are good that he will be the best player in the field, making him the man to beat for bragging rights.